Contents May Have Shifted 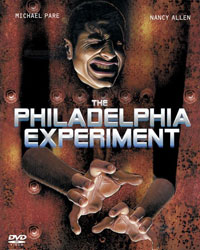 This 2007 DVD cover for 1984's "The Philadelphia Experiment" dispenses with the cheese and hypes the teleportation horror.
Image courtesy Anchor Bay UK

Any conspiracy theorists worth their tinfoil hats can tell you all about the fabled Philadelphia Experiment. Allegedly, the 1943 U.S. Navy experiment sought to turn a U.S. Navy destroyer invisible -- and accidently teleported the USS Eldridge from Philadelphia, Penn., to Norfolk, Va.

Sounds great, doesn't it? As if you set out to discover a cure for the common cold and happened to wipe out cancer instead. But, of course, there was a problem. While the experiment successfully teleported the Eldridge some 271 miles (436 kilometers) in one piece, the human crew didn't fare so well.

According to both conspiracy nut ramblings and one 1984 movie, the teleported destroyer re-entered physical reality with much of its crew half-buried in the ship's bulkheads. Indeed, contents may have shifted during flight -- and reformed inside other contents.

If there's any validity to this story of reality-warping warships, then the Philadelphia Experiment represents humanity's first awkward dabbling in teleportation science. The U.S. Navy, for what it's worth, denies the whole incident.

Starships also suffer from disastrous teleportation methods. In 2040, the Event Horizon activated an experimental gravity drive designed to link two points in space-time through an artificial black hole. Unfortunately for the crew, the drive opened a gateway to Hell instead. It was seven years before the ship reappeared in our dimension.