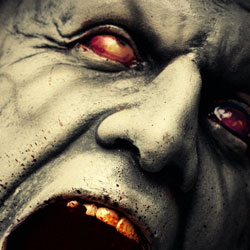 "It's eternity in there ... "
©iStockphoto.com/inhauscreative

By the early 24th century, humanity already had a knack for teleportation -- or "jaunting" as it was known in those days. But you know how it goes. New technologies start off on rather shaky legs. Jaunters used a primitive and dangerous method of teleportation known as the Carune Process.

What was wrong with it? Well, nothing if you happened to be a shipment of steel girders or an absurdly long novelty meatball sub. For living things, however, the Jaunt was a whole different kettle of fish.

They called it the Jaunt effect, and it all boiled down to the perception of time. Physically, a mere 0.00000000067 seconds passed between two jaunt portals. But for the conscious mind, an immeasurable and unfathomable gulf of years spanned the two points.

While accounts vary, as many as 30 live human beings allegedly passed through the jaunt during its testing phase -- and all of them emerged on the other side either dead or insane. Meanwhile, the rest of humanity enjoyed the fruits of teleportation while gassed unconscious on a hospital gurney.

In the most infamous example of the effect, a 12-year-old boy mischievously held his breath during a family jaunt to Mars. He re-emerged white-haired, babbling madness and clawing his own eyes out. Author Stephen King famously recounted this tragedy in his work "The Jaunt."

The Carune Process was eventually abandoned in favor of less-dangerous methods, but it underlies an ever-present concern with teleportation. No matter how instantaneous the method of matter transference, there is always a hidden or implied space between -- space enough for any number of horrible things.

In the year 2266, Captain James T. Kirk suffered a teleporter malfunction due to contamination by a magnetic ore. Instead of turning him inside out, however, the malfunction split him into two separate James T. Kirks, one good and one evil.