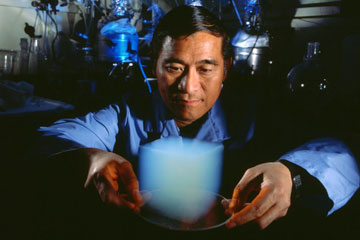 Are aerogels the perfect sponge?
NASA/JPL-Caltech

Let's say the morning fumbles get the better of you and instead of going in your cereal bowl, half a pint of milk splashes all over the kitchen floor. What do you do? Assuming the household pet doesn't swoop in for the most awesome accidental breakfast ever, you'll probably want to sop up all that spilled milk with a towel or sponge.

But when big spills hit our environment, scientists think the best sponge is the one made out of aerogel, a low-density solid that resembles a cross between a slice of Jell-O and a brick of smoke. A normal gel is essentially a solid riddled with tiny holes called nanopores, which are in turn filled with liquid. An aerogel, however, features nanopores filled with gas. Chemists create this property by drying an alcohol-based gel supercritically, or at a temperature and pressure above its critical point. (This is the moment when a liquid and its vapor become identical.) When the alcohol evaporates, the porous structure remains. Still curious? There's more information to be found in How Aerogels Work.

The resulting substance is the lightest solid on Earth, and it's more than a mere curio. Given all the trapped gas inside, aerogels make for excellent insulation against both terrestrial and extraterrestrial heat. That's why NASA used the substance to insulate its Mars rovers and has even used cubes of aerogels to catch tiny particles of comet dust.

Aerogels are highly absorbent. Remember, a normal sponge can hold water because of all the empty space in its structure. Water or spilled milk simply displaces the air. Aerogels are mostly air, so the capacity for absorption is even greater. In fact, aerogels are typically 95 to 99.5 percent porous [source: NASA]. The main catch, however, is that scientists have to specially tailor an aerogel to retain a particular liquid.

Currently, aerogels are produced in small quantities and at high costs that prohibit mass production, but some scientists think oil-absorbent aerogels could prove especially useful in oil spill cleanups. While chemical-based cleanup methods may render the oil unusable, aerogels offer a purely physical technique. Oil companies could literally wring out the sponges and use the captured oil.

Some researchers believe that aerogel particles could be used in filters to remove other toxic contaminants from both air and water. Water filters, for instance, often rely on activated carbon to absorb chemical impurities. This is just an absorptive charcoal filter with a slight positive electric charge to attract the negative ions in harmful chemicals. Such filters work very well, but experiments indicate that aerogels can absorb 130 times more pollutants as activated carbon [source: Lerner].

Future aerogels may both prevent toxic spills, as well as help clean them up when worst comes to worst. For now, however, we'll have to depend on more traditional, less costly methods of filtration and absorption.

Birth Order Is Kind of Baloney
What if the sun disappeared for a week?
What if we had two suns?