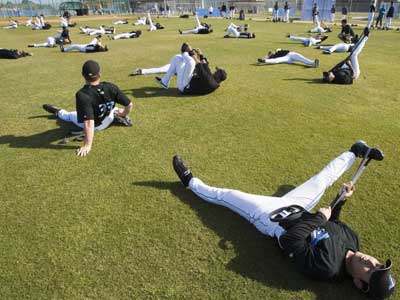 The most important interaction on the baseball field occurs between the pitcher and the batter. The pitcher throws a 90 mile-per-hour (145 kilometer-per-hour) ball 60 feet 2 inches (18.4 meters) at a batter, who then has less than 0.4 seconds to react before it slams into the catcher's mitt. The pitcher aims for an imaginary square 15 inches (38 centimeters) wide above the home plate. The batter then attempts to hit the ball with the bat's center of mass, a 2-inch (5-centimeter) section toward the bat's center, known as the sweet spot. Even the best Major League batters only hit it 38 percent of the time, at best.

So just how do you learn to throw the perfect fastball or hit that game-saving homer? Throughout the history of the game, the answer has been what it is for any athletic competition: practice and training. On one hand, a player needs to have the physical prowess to put that much energy into a pitch or swing, but it takes reflex and well-rehearsed movements to channel it correctly. This means particular stances and full-body movements that throw the most kinetic energy into a swing or pitch. A competent pitcher should know exactly which grip to place on the ball to deliver a fastball, changeup, breaking ball or knuckleball.

The goal of spring training is to get everyone in shape and back in form for the upcoming season. For the longest time, hitting and pitching instruction stressed intuitive thinking and repetition through hitting and pitching drills -- not science. They simply replicated what works and repeated it until the movements became second nature.

Physics, however, adds an entirely different dimension to the process.