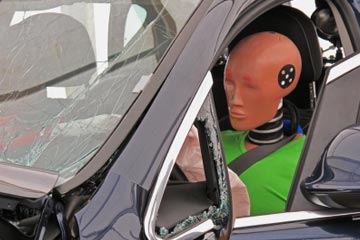 We seldom think about how fragile life is until we experience a traumatic event, such as a car accident. Your life could very well hang in the balance of what happens in just a few milliseconds, and the outcome may depend on the construction of your car. While no car is perfectly safe, engineers work to improve designs to minimize the potential of serious injuries.

To do this, auto manufacturers pour millions of dollars into test crashes to study what exactly happens in a crash with different car models. The point is to find out how dangerous a collision would be for a car's driver and passengers. But, of course, who would volunteer to be a human guinea pig in that kind of situation? Even in a controlled environment, it's far too dangerous to test crash a vehicle with human occupants. So, the important task falls to anthropomorphic test devices (ATDs), also known as crash test dummies. These are made in different sizes to imitate the range of a human family -- from infants to adults.

But engineers can't just settle for a simple human-shaped stuffed doll and call it a day. That's because a simple doll wouldn't be able to tell a researcher whether a crash resulted in a broken bone, a cracked rib cage or skin abrasions. Crash test dummies are becoming sophisticated enough to simulate such injuries. A modern ATD has such an advanced, detailed construction that one costs more than $100,000 -- though it lasts dozens of crashes.

Also, in a crash, the car may stop, but your body keeps moving. A person's injuries largely depend on how your body is thrown in the accident. Because of that, the dummy must not only have a realistic human weight in relation to its size, but the weight must be distributed just like a human's. This way, researchers can watch just how hard and quickly a 10-pound head hits an inflating airbag.