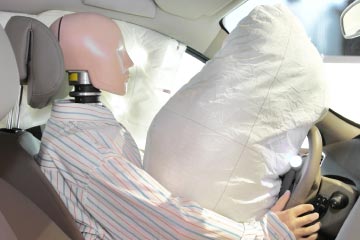 Researchers will even dress dummies in clothes to make the situation as close to reality as possible.
©iStockphoto/uatp2

It makes sense that watching a slow-motion video of a properly weighted, humanlike dummy could help researchers determine if a crash will result in external injuries. Perhaps less believable is that a dummy could tell us whether the crash will result in an internal injury. The human body and its sensitive internal organs are so complex that a mere polymer and metal construction seem an inadequate representative.

However, we have a good idea of what the human body can sustain and how much force will result in a critical internal injury. The trick is to find if a crash results in those particular forces.

if you remember from the last page, we mentioned that ATDs are equipped with sensors in various points of the body. These electronic sensors can actually measure the force of impact, accelerations and deformations that are sustained in the collision. In the Hybrid III, these are mounted in the head, neck, chest, pelvis, thighs, legs and ankles. In all, these sensors can record 37,200 different pieces of data in one ATD [source: Mello]. Knowing this information helps researchers to determine what forces will happen to a body and where, which can help them predict all different kinds of injuries. They can use this data to determine if something will likely be a flesh wound or an internal injury.

But another technology has also developed that can perhaps more accurately predict internal injuries. By simulating a crash and a dummy completely in a computer model, researchers believe they can determine whether an internal injury will be sustained. In particular, researchers at the Virginia-based National Crash and Analysis Center have been working on computerized crash tests. They say they can look at details of brain injuries, for instance, that are seen easily in computerized models [source: Science Daily].