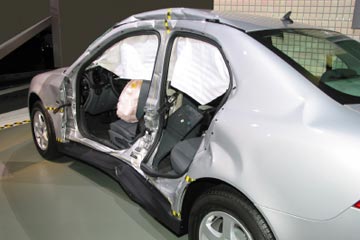 Although it may be strange to think about, using cadavers in crash tests gives researchers useful data that might save lives.
©iStockphoto/sebastianiov

We mentioned earlier that the U.S. Air Force used the original crash test dummy in the 1940s. But, in a sense, the history of crash testing subjects date back even further. As early as the 1930s, Wayne State University researcher Lawrence Patrick wanted to test the limits of the human body. Instead of manufacturing a humanlike dummy, he actually used a human -- himself. He took on a 22-pound metal pendulum to the chest among other blows.

But when Patrick needed to test what happens when a body is thrown, he wanted to send a person down an elevator shaft. This time, he again used a human. But rather than himself, he used a dead person.

As gruesome, morbid or unethical as it may sound, using cadavers as crash test subjects makes a lot of sense from a practical standpoint. There is no danger to human life, and researchers can reap some of the most useful, life-saving information from cadaver tests. Patrick has claimed that despite the public outcry that this violated the dignity of the human body, he treated the dead bodies with respect [source: Roach].

The U.S. National Highway Traffic Safety Administration (NHTSA) funds crash tests with cadavers. And, although they don't like to admit it, auto manufacturers are believed to still use cadavers in tests [source: Hyde].

Cadaver testing isn't perfect, though. The available bodies are usually elderly, meaning bones break more easily than the average driver. Also, there is no pressure in the lungs and blood vessels of cadavers, among other problems. Living biological tissue is dramatically different from dead tissue just as it's different from synthetic ATD material. Even using cadavers, it's been difficult for researchers to simulate a pedestrian accident [source: LASTPEP].

In his cadaver crash tests, Patrick had to manipulate the bodies' joints to loosen them. He also took out the brain and put gelatin in its place, in addition to screw-mounting accelerometers to the head [source: Roach]. It's a controversial question as to whether such adjustments, in addition to smashing the bodies full force in a crash test, is inherently disrespectful to a body. It's no wonder auto manufacturers like to keep quiet about cadaver testing.