Solar Cells Everywhere -- Even on Your Tent 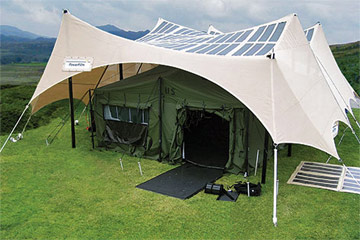 A 2kW PowerShade made by PowerFilm. Note the shelter's amorphous-silicon photovoltaic panels integrated directly in the shelter's fabric. One structure could produce about 10 kW per day.
Image courtesy PowerFilm

In the future, solar cells might not use silicon at all, and they could have some interesting capabilities as a result. Researchers at Wake Forest have developed a solar cell made nearly entirely of plastic. Not only is the new cell cheaper to produce and very efficient at capturing solar energy, it's also flexible enough to be transported in rolls, like the thin-film ones we just talked about.

Taking things even further, researchers from the University of Michigan have found a way to integrate solar cells directly into textiles. These new solar cells employ a different approach for capturing solar energy: They incorporate organic compounds in place of semiconductors. As luck would have it, the organic dyes used on textiles are very similar in structure to those used in organic photocells. By using these dyes to create extremely thin solar cells and then embedding those cells into textiles, the research team has created a photocell with incredible flexibility.

According to Dr. Max Shtein, who leads the University of Michigan research team, everything from coats to tents could be made from these textile-based solar cells. Even better, these new photocells also could be cheaper to produce than those based on silicon. And while they are less efficient at converting solar energy into electricity under ideal conditions, they actually outperform traditional solar cells at capturing diffuse light. All this adds up to a solar cell that's easy to use, flexible, lightweight, affordable and works under all sorts of conditions. In other words, it can do anything a tarp can do and charge your laptop, too.

Wondering when you could get your hands on a solar-powered tent for your next walkabout? If you're a member of the U.S. military, you might be in luck. With fuel convoys being attacked repeatedly in Afghanistan and Iraq, military leaders such as Secretary of the Navy Ray Mabus have been pushing successfully to incorporate more renewable technologies into the field. The U.S. Marines has tested solar-powered tents in Afghanistan, and the U.S. Army has tried them out as well, evaluating products such as PowerShade, TEMPER Fly and QUADrant [sources: Osborn, Rosenthal]. So yes, companies are able to make power stations out of tarps.