Can you make a WiFi network out of a bus? 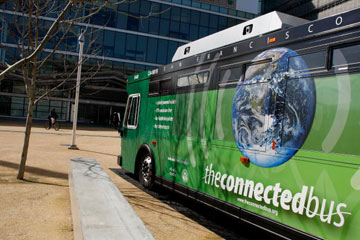 Whether you believe technology is connecting human beings across the globe or turning us all into dependent tech junkies, it's impossible to deny that WiFi is becoming a more pervasive feature in everyday life. It's not unusual to find WiFi connections in airports, coffee shops, hotel rooms and even public parks. But not everyone in the world has easy access to the Internet.

Some impoverished or remote regions don't have the infrastructure to connect to the Internet. While companies try to build out infrastructure to these areas using physical cables, satellite linkups and broadcast towers, the people living in these regions right now aren't able to jump online any time they want.

To help people in places like Costa Rica and Rwanda connect to the Internet, a company called United Villages has developed a simple approach. The company sells Web servers to remote communities. People in those communities can post messages, place orders and perform other online activities. But the catch is that the server isn't connected to the Internet. Instead, United Villages sends a vehicle -- a bus -- to the community. The bus contains computers that link to the Web server and pull data from it.

When the bus reaches a town with a connection to the Internet, the computers inside upload the stored information to the network. The computers also receive requested information. The next time the bus reaches the remote community, it updates the Web servers and the process begins again. Think of it as an Internet connection with serious lag issues.

Meanwhile, in other parts of the world, it's becoming more common to hop on a bus and connect to the Internet through a bus network. The Greyhound bus line launched WiFi service on some routes back in 2008. Even some schools in the United States have buses outfitted with wireless routers to provide WiFi service.

How do they do it? The routers connect to cellular modems that transmit data to cell phone towers. Data transmission rates are slow compared to a stationary wired connection -- you wouldn't want to try to watch a streaming movie or play an online first-person shooter game on the bus. But for the techno geek on the go it's almost a necessity.

The next generation of wireless technology will improve connection speeds. Several cities already have WiMAX networks, LTE towers or both. These competing technologies boast faster data transmission speeds than cellular 3G networks. They're also capable of conducting handovers. That's the process of one WiMAX, LTE or cellular transmitter handing a connection over to a second transmitter. Without this capability, you'd be confined to the area covered by one transmitter's range of operation.

Does this technology help us stay in touch or is it actually closing us off to human contact? It's a pretty safe bet that people living in remote villages probably a have different opinion on the subject from the urban technologist with a smartphone in hand.

For more technologies that have been adapted in innovative new ways, take a look at the links on the next page.

Are the Yeti Just a Bunch of Bears? Genetics Says "Yes."
Turn Your Dead Body Into a Tree!
Would Psychic Powers Really Cause a Nosebleed?