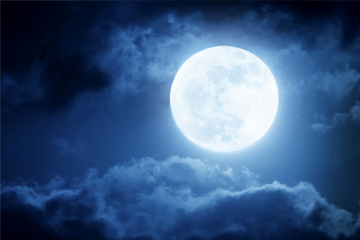 Does a full moon lead to a more restless night of sleep? Studies say yes -- but why?
ricardoreitmeyer/ThinkStock

There are all manner of things people endure in their quest for a good night's sleep, including barking dogs, crying babies, work stress and an array of electronic devices. With all those distractions, it's not surprising that more than half of Americans aren't getting the sleep they need. But there is one important factor that you may not have on your "to be conquered before snooze can happen" list, and it comes around about once a month. It's that luminous orb in the sky: the full moon.

This article tackles the question of whether the full moon affects a person's sleep. For starters, it helps to understand what a full moon is. A full moon happens when the sun, Earth and moon are all in alignment, with Earth in the middle [source: NASA]. In this positioning, the moon is most fully illuminated by the sun from the perspective of the observer on Earth. This happens approximately once every 29 days.

What effect does this phenomenon have on us earthlings? The most obvious example of the full moon is that the night sky is much brighter. The moon is also responsible for ocean tides, which occur based on gravitational attraction from the moon as well as the sun [source: NOAA]. Without the moon's contribution, we'd have some pretty unhappy surfers.

Insight into the moon's affect on human behavior comes from a fairly robust body of research with mixed results. For example, one study of 675 Danish children aged 8 to 11 found that kids actually slept slightly longer during the period around the full moon [source: Sjodin]. Conversely, another study of 319 adults found that full moons were associated with less sleep efficiency [source: Turanyi].

A 2013 study may provide the most compelling data. It followed 33 adults over a period of three years and found that full moons were associated with longer times to fall asleep, reduced sleep efficiency and less overall sleep time [sources: Cajochen]. Known as the Cajochen study, it is most often used in recent years as the premise for the claim that the full moon affects sleep. Assuming that the data are correct, it seems fair to say that, yes, the full moon can affect sleep. But the question remains, how?

The basic premise of the full moon's effect on sleep is that, before the invention of artificial light, humans had only the moon to provide light at night. Ancient human societies that predominantly lived and slept outdoors would certainly have been affected by the luminescence of a full moon, to the extent that any glowing orb can cause sleep disturbance in humans.

This hypothesis is intriguing and intuitive, but may not provide a full explanation. The Cajochen study was conducted in a completely darkened lab, which suggests that the human physiological response to a full moon may be innate rather than environmental. While the study authors agree that there is still quite a bit of mystery around how the moon cycles may affect sleep, they proposed that perhaps the lunar cycles represent a new dimension in human biological rhythmicity that warrants further investigation [source: Cajochen].

While there remain numerous unanswered questions about how the full moon may influence sleep in humans, it seems clear that people who may be affected by these forces will have little relief by blocking out the sight of the moon in their bedrooms. Our internal clocks are mightier than we give them credit for.

We humans go to great lengths to control our surroundings with artificial light, around-the-clock electronic stimulation and an increasingly connected global population. But perhaps we should keep in mind that we are still influenced by the simple yet powerful forces in the world around us.

Are Chewbacca and Bigfoot Related?
What if the Earth had two moons?
Is Chicago the windiest city in the U.S.?