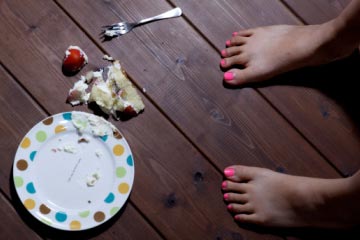 Moral (and health) dilemma: pick it up or let it go?
Indeed/Digital Vision/Getty Images

You can almost taste the last chocolate truffle in the box. As you raise it to your lips, your mouth begins to water with delicious anticipation. And then -- oops! It slips out of your hand and lands (along with your sweet expectations) on the floor. But it's still intact. Do you a) apply the five second rule, pick up it, dust it off and eat it or b) throw it in the trash and head to the store for another box?

If you picked the second option, congratulations. You've just avoided consuming something covered with thousands of germs. If you picked choice A, however, you may be interested to know that the five second rule (no doubt invented by a kid eager to enjoy the last bite of his fallen Hershey bar) is a dirty little lie.

The idea that food scooped from the floor in less than five seconds would be free of germs was first disproved by high school student Jillian Clarke during her internship at the University of Illinois in 2003. Clarke coated tiles with E. coli bacteria and then proceeded to drop gummy bears and fudge-stripe cookies onto their surfaces. She not only found that bacteria certainly did jump onto the food in five seconds, she also uncovered some interesting facts about human behavior -- namely that women were more likely to eat food that had fallen than men, and that sweet treats were more likely to be rescued and consumed than were veggies.

In many ways, Clarke's research raised more questions than it answered. Did the surface food contacted have an impact on germ transfer? What about the type of food? And if five seconds was bad, was 10 seconds even worse? A team of researchers at a South Carolina University attempted to answer some of these questions. Their findings and more germy information can be found on the next page.

Salmonella and the Five Second Rule

In May 2007, scientists at Clemson University in South Carolina decided to find out just how much ick sticks to food as well as to various floor surfaces. By applying a "salmonella soup" to tile, wood and nylon carpet, the researchers were able to not only see how long the germs lived in those environments, but also how many of the micromenaces transferred to slices of bread and bologna.

The researchers discovered that salmonella could survive on all three surfaces for up to four weeks -- and that they thrived particularly well on the carpet. As for how quickly the germs climbed aboard the bologna and bread, it was found that the longer the contact with the floor, no matter what the surface, the higher the transfer of germs. So, when left on the floor for just five seconds, both foods picked up between 150 and 8,000 bacteria. But if they were left for a full minute, the rate was magnified 10 times [source: McGee]. Combine this with the fact that it can take just 10 of some strains of salmonella bacteria to cause infection, and it becomes clear that grounded food should stay that way.

But surely the pH of our saliva and stomach acids can wage a good fight against contaminated food, right? "No," says microbiologist Charles Gerba, the "germ guru" of the University of Arizona. "Many viruses survive the low pH -- in fact, they like it. Viruses like hepatitis A and norovirus survive well at low pH. So do bacteria like salmonella. Any bacteria that infects the intestine can survive the low pH long enough to get to the intestine."

It's also important to consider where your Twinkie or hot dog has landed. According to Gerba, there is quite a difference between floor germs based on their location. He says that public restrooms top the list. He also adds, however, that all floors and carpets are dangerous "because people track bacteria and viruses on their shoes all the time. About 93 percent of the shoes we have tested have fecal bacteria on the bottom."

Unfortunately, public floors aren't the only germ fields we should be concerned about. Read on to discover some other surprising bacterial havens.

A 2008 study at the University of Colorado found that women have a markedly higher diversity of germs on their hands than men. The study authors theorize that the likely reason for this is the difference in skin pH levels between men and women -- guys tend to be more acidic.

Bacteria in Your Home: Germ Geography

Think a doughnut dropped on your sparkling kitchen floor might be edible with just a quick brush off? It might be -- if you'd have no problem eating something out of the garbage. A study from the Hygiene Council (sponsored by the company that makes Lysol) found that kitchen floor just in front of the sink has more bacteria (830 per square inch) than the trash can (411 per square inch). Other surprises included the fact that the sponge held 60 times more bacteria than the pet's food bowl and that the kitchen counter was more germy than the toilet seat [source: CBS News].

In fact, toilet seats get a bad rap all around. A recent study by Gerba has shown that they're not even the dirtiest place in the bathroom. That honor goes to the toilet paper dispenser, with more than 150 times the bacterial levels of the porcelain throne. The next most contaminated spot is the paper towel dispenser, which harbors 50 times more germs than seats [source: Reuters].

To further defend the commode, your cell phone carries 25,000 germs per square inch, while toilet seats hold only 344 bacteria in the same space -- and we all know how much time we spend with our mobiles pressed close to our mouths [source: Sinovic]. Among the germs clamoring to join our conversations are staph, found on nearly half of 25 random mobile phones tested by Gerba [source: ABC News Health].

When the "germ guru" turned his attention to another everyday item -- women's purses -- the results weren't any more encouraging. Through a small random field test, the numbers of bacteria found on the bottom of ladies' bags ranged from small numbers to the nation-sized amount of 6.7 million [source: Leamy].

Fortunately, most of the germs that are crawling around our desks, on our phones and beneath our bags are of the benign kind and are kept under control with basic hygiene. But people with compromised immune systems, or those who spend time in areas likely to be contaminated with E. coli or salmonella, should definitely think for at least five seconds before putting anything in their mouths that has touched the floor.

Everyone knows that bleach is a good weapon in the war on germs, but until recently, it wasn't clear just how the liquid did its job. Research from the University of Michigan has shown that bleach works thanks to its active ingredient, hypochlorous acid. The compound attacks proteins in bacteria, causing them to clump together and eventually die. The reaction is similar to the way in which bacteria responds to high temperatures. The hope is that this discovery will help scientists better understand how people fight off infections.