How does a driving simulator replicate dangerous situations? 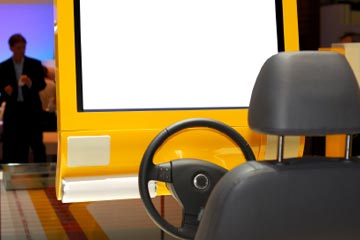 Testing dangerous conditions on a driving simulator is safer than testing out on the road.
©iStockphoto.com/jacus

Once you construct a driving simulator that feels as realistic as possible, as well as a virtual world to drive in, you can conduct tests to gather invaluable research. These tests can be as simple as asking a driver to text on a cell phone while handling traffic with sudden stops, pedestrians and cyclists. But some simulators can also create dangerous weather and wet roads.

Data collection can get amazingly detailed. The Center for Intelligent Systems Research at George Washington University has a driving simulator with the capability to collect data about a driver's eye movement, blink rate and blink length, and focal point of attention [source: CISR].

Researcher Omar Ahmad explains that he has done studies with the NADS simulator that test the driving habits of drunk drivers. NADS projects a simulation of a nighttime drive home from the bar to study several groups of drivers. This includes a placebo group of those who unknowingly drink non-alcoholic drinks and groups of drivers with various blood-alcohol levels. From studying the driving habits of drunk people, such as steering swerve and speed changes, Ahmad says they are developing sensors that can be installed in cars that actually detect whether the driver is under the influence of alcohol. He claims these sensors now have 80 percent accuracy -- they identify four out of five drunk drivers. And in tests there have been no false positives -- meaning they don't misidentify any sober people as drunk [source: Ahmad].

Other than drinking, driving simulators are used to test how people drive while on various drugs or when suffering from medical or psychological issues. The U.S. National Highway Traffic Safety Administration (NHTSA), as well as various other government agencies, the auto industry and pharmaceutical companies, are known to fund driving simulator studies. The researchers at NADS were also recently awarded a study to develop sensors that detect drowsiness [source: Ahmad].

Dr. Azim Eskandarian says that beyond testing driving behavior in dangerous conditions, driving simulators allow researchers to determine the safest vehicle control functions and road designs. These can include testing seat belts as well as what font size works best on road signs.

Of course, other ways to gather this information include a closed test track or a field operational test in normal road traffic conditions. However, not only are driving simulators often more cost effective, they're obviously safer for gathering research on dangerous situations.