How have high beams become safer to use? 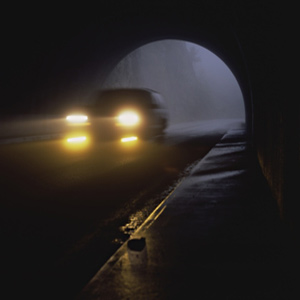 Driving at night can be a scary proposition - and it’s even scarier if you can’t see the road well.
Rob D. Casey/Getty Images

Driving at night requires extra caution. It's simply harder to see when you have to rely on artificial sources of light, such as your headlights or street lights, to see the road, as well as other cars, pedestrians, animals or other hazards.

Recent National Highway Transportation Safety Administration (NHTSA) statistics show that 42 percent of all crashes occur after dark, as well as 58 percent of fatal crashes and 67 percent of all pedestrian fatalities -- even though traffic volume is much lower. Alcohol, fatigue and glare from streetlights and other cars play a role in nighttime accidents, but reduced visibility is to blame in most accidents [source: Road and Travel].

Most drivers don't adjust their speed relative to their ability to see the road ahead. In fact, driving above 45 miles (72.4 kilometers) per hour puts drivers at risk of "out-driving" the reach of their headlights at the low-beam setting, compromising their ability to react and stop safely.

One way to drive more safely is to use your high beams. They point outward to help you see objects at a greater distance, providing an additional 100 feet (30 meters) or more of forward lighting. Unfortunately, many drivers don't use their high beams as much as they should; in fact, research by the U.S. Department of Transportation shows that drivers use their high beams less than 25 percent of time when conditions would justify their use.

Why are drivers reluctant to use their high beams? Drivers say they worry about switching them off when meeting oncoming traffic and temporarily annoying or blinding other drivers, are unable to switch them on-and-off fast enough or simply forget.

That said, Gentex Corporation's SmartBeam is designed to increase usage of high beams by drivers and eliminate the repetitive task of turning the high beams on and off automatically.

SmartBeam is a high beam headlamp assist technology that includes a tiny camera and microprocessor with algorithmic decision-making tools located in an automatic-dimming rearview mirror that also darkens automatically to eliminate glare from headlamps of vehicles approaching from the rear.

A recent study by research company The Planning Edge shows that drivers of vehicles equipped with SmartBeam said they are using their high beams 50 percent more often that they did before having the feature. Nearly 70 percent said they felt safer driving at night with the SmartBeam features [source: Road and Travel]. The technology is currently being added to more new cars, including models by Saab, Ford, Audi, BMW, Jeep, Chrysler and others.

For more information on automotive features, head to the links on the next page.