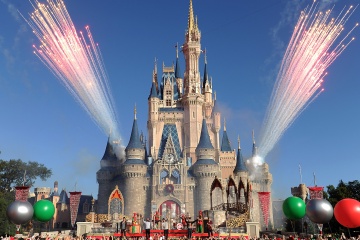 Sure, we all know Walt Disney World is awesome above-ground. But what goes on underneath all the attractions?
Mark Ashman/Disney Parks via Getty Images

Ask just about any kid you know where to find the happiest place on Earth, and they'll point you to Walt Disney World in Lake Buena Vista, Florida. Opened in 1971 and the size of San Francisco, it's one of the most visited spots in the world. Led by mascot Mickey Mouse and dozens of characters old and new, Walt Disney World simply never gets old.

Part of the fun and mystique of Disney World is its obsessive fans, who crave and constantly seek out information and trivia about their beloved park. As a result, urban legends about Disney World abound. Following are just a few of them.

Many people claim the park is haunted — whether it's by a single ghost in the Haunted Mansion, multiple spirits around the park or the ghost of Walt Disney himself. Legend also has it that nobody is allowed to be declared dead on the grounds of the park. Some say park authorities let packs of feral cats roam the park at night to rid it of mice and other rodents. And we've heard stories of people dumping the ashes of their loved ones in the park or even on the rides. Some of these stories may be true, and some may not. Who knows?

One tale that's not so tall, however, is the one about the secret city under Walt Disney World. Yes, it's true: There's a bustling scene just below the park. Here's the story.

First, Walt Disney World's secret city isn't actually underground — Florida is too swampy for subterranean construction. It's more like the ground floor of the park, and the part that's open to the public, which is built on an almost unnoticeable incline, makes up the second and third floors. The secret city is an octagon-shaped network of connected tunnels called utilidors (short for "utility doors") with a central tunnel cutting through the middle. There are hidden access points all around the Magic Kingdom.

Walt Disney came up with the utilidors idea when he was strolling through Disneyland in California and saw a costumed cast member from Frontierland walking through Tomorrowland — a jarring sight, to say the least. Not wanting to spoil the Disney magic, he decided to build tunnels into his new Florida park so cast members could move through the grounds undetected.

The tunnels serve many other practical purposes, too:

These tunnels allow the Walt Disney World "magic" to happen behind the scenes. And, if you're visiting the park and have an extra five hours and $79 or so in your pocket, you can actually tour certain parts of the tunnel and get a look for yourself. The Disney's Keys to the Kingdom Tour takes you down into the belly of the beast and shows you just how much work it takes to make the Magic Kingdom so magic.