What Is the LHC Looking For? 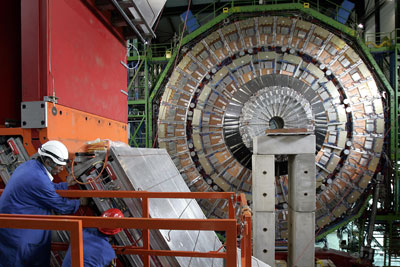 In an attempt to understand our universe, including how it works and its actual structure, scientists proposed a theory called the standard model. This theory tries to define and explain the fundamental particles that make the universe what it is. It combines elements from Einstein's theory of relativity with quantum theory. It also deals with three of the four basic forces of the universe: strong nuclear force, weak nuclear force and electromagnetic force. It does not address the effects of gravity, the fourth fundamental force.

The Standard Model makes several predictions about the universe, many of which seem to be true according to various experiments. But there are other aspects of the model that remain unproven. One of those is a theoretical particle called the Higgs boson particle.

The Higgs boson particle may answer questions about mass. Why does matter have mass? Scientists have identified particles that have no mass, such as neutrinos. Why should one kind of particle have mass and another lack it? Scientists have proposed many ideas to explain the existence of mass. The simplest of these is the Higgs mechanism. This theory says that there may be a particle and a corresponding mediating force that would explain why some particles have mass. The theoretical particle has never been observed and may not even exist. Some scientists hope the events created by the LHC will also uncover evidence for the existence of the Higgs boson particle. Others hope that the events will provide hints of new information we haven't even considered yet.

Dark matter might also play an important role in LHC research. Our current understanding of the universe suggests that the matter we can observe only accounts for about 4 percent of all the matter that must exist. When we look at the movement of galaxies and other celestial bodies, we see that their motions suggest there's much more matter in the universe than we can detect. Scientists named this undetectable material dark matter. Together, observable matter and dark matter could account for about 25 percent of the universe. The other three-quarters would come from a force called dark energy, a hypothetical energy that contributes to the expansion of the universe. Scientists hope that their experiments will either provide further evidence for the existence of dark matter and dark energy or provide evidence that could support an alternate theory.

That's just the tip of the particle physics iceberg, though. There are even more exotic and counterintuitive things the LHC might turn up. Like what? Find out in the next section.

Big Bang on a Small Scale