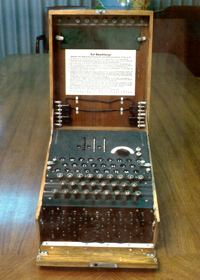 Privacy is paramount when communicating sensitive information, and humans have invented some unusual ways to encode their conversations. In World War II, for example, the Nazis created a bulky machine called the Enigma that resembles a typewriter on steroids. This machine created one of the most difficult ciphers (encoded messages) of the pre-computer age.

Even after Polish resistance fighters made knockoffs of the machines -- complete with instructions on how the Enigma worked -- decoding messages was still a constant struggle for the Allies [source: Cambridge University]. As the codes were deciphered, however, the secrets yielded by the Enigma machine were so helpful that many historians have credited the code breaking as a important factor in the Allies' victory in the war.

What the Enigma machine was used for is called cryptology. This is the process of encoding (cryptography) and decoding (cryptoanalysis) information or messages (called plaintext). All of these processes combined are cryptology. Until the 1990s, cryptology was based on algorithms -- a mathematical process or procedure. These algorithms are used in conjunction with a key, a collection of bits (usually numbers). Without the proper key, it's virtually impossible to decipher an encoded message, even if you know what algorithm to use.

There are limitless possibilities for keys used in cryptology. But there are only two widely used methods of employing keys: public-key cryptology and secret-key cryptology. In both of these methods (and in all cryptology), the sender (point A) is referred to as Alice. Point B is known as Bob.

In the public-key cryptology (PKC) method, a user chooses two interrelated keys. He lets anyone who wants to send him a message know how to encode it using one key. He makes this key public. The other key he keeps to himself. In this manner, anyone can send the user an encoded message, but only the recipient of the encoded message knows how to decode it. Even the person sending the message doesn't know what code the user employs to decode it.

The other usual method of traditional cryptology is secret-key cryptology (SKC). In this method, only one key is used by both Bob and Alice. The same key is used to both encode and decode the plaintext. Even the algorithm used in the encoding and decoding process can be announced over an unsecured channel. The code will remain uncracked as long as the key used remains secret.

SKC is similar to feeding a message into a special mailbox that grinds it together with the key. Anyone can reach inside and grab the cipher, but without the key, he won't be able to decipher it. The same key used to encode the message is also the only one that can decode it, separating the key from the message.

Traditional cryptology is certainly clever, but as with all encoding methods in code-breaking history, it's being phased out. Find out why on the next page.