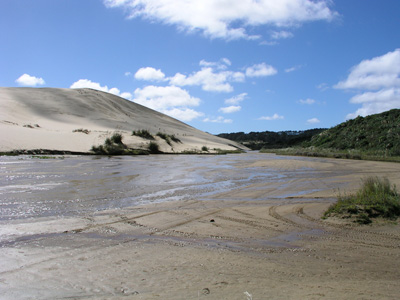 Quicksand isn't as scary as Hollywood makes it out to be in the movies.
Photographer: Disorderly I Agency: Dreamstime.com

Before we delve into this question, we need to take a look at how quicksand works. When you see quicksand in the movies, a doom-destined hero or heroine is typically being sucked into a huge mass of moving, wet sand. Fortunately, quicksand isn't quite the fearsome force of nature that you sometimes see on the big screen.

Quicksand isn't a unique type of soil; it's usually just sand or another type of grainy soil and can occur anywhere under the right conditions, according to Denise Dumouchelle, a geologist with the United States Geological Survey. A good example is sand at the beach. Think about the wet sand just at the edge of the surf. It looks solid, but when you tap it with your big toe, it jiggles. Quicksand is basically just ordinary sand with reduced friction between sand particles. The "quick" in "quicksand" refers to how easily the sand shifts.

OK, so now we know how it works -- but what happens when two people stumble into some quicksand? The average human body has a density of 62.4 pounds per cubic foot (1 g/cm³) and is able to float on water. If you have a low percentage of body fat, you're going to be denser, but the air trapped in your lungs will still let you float. Quicksand is denser than water -- it has a density of about 125 pounds per cubic foot (2 g/cm³) -- which means you can float more easily on quicksand than on water. The key is not to panic. Most people who drown in quicksand, or any liquid for that matter, usually panic and begin flailing their arms and legs.

What Not To Do in Quicksand 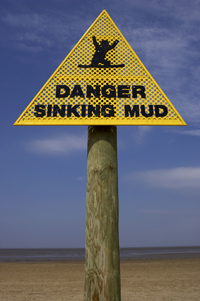 The most common misconception about quicksand is that it's some kind of living, bottomless pit of sand that actually pulls you down into it. If you step into quicksand, you actually won't be sucked down. However, your movements can cause you to dig yourself deeper into it. According to Dumouchelle, once you've stepped into quicksand, it's your weight that initially causes you to sink. So at first, the heavier person might sink more quickly. But once each victim is in up to his or her knees or so, weight doesn't really matter. If a person has a higher percentage of body fat, it's possible he or she will have a very slight advantage and be more buoyant -- and will float to the top more quickly.

The worst thing to do is to thrash around in the sand and move your arms and legs through the mixture. You'll only succeed in forcing yourself further down into the liquid sandpit. The best thing to do if you fall into deep quicksand is to make slow movements and bring yourself to the surface, then just lie back. You'll float to a safe level. This approach works best in quicksand that's fairly well saturated.

The sand-to-water ratio of quicksand can vary, causing some quicksand to be less able to support weight. So, if you find yourself in sand that's less saturated (think of concrete), there's a better method to try.

One of the most common reactions once a person finds his or her foot stuck is to shift weight to the other foot. At this point, a sort of seesaw motion happens -- with the person alternating their weight back and forth, trying to get a foot out of the quicksand. This movement actually worsens the predicament. What you should do instead is fall forward and try to spread the weight of your body over a large area of ground. Continue to work at freeing your foot, using slow motions so that you don't work your foot in deeper. Once you've pulled your foot out, roll away from the area, jump up very quickly and sprint to solid ground.

There have been many cases where people have gotten their legs trapped in quicksand and haven't been able to escape on their own. The sand has to be at just the right moisture for this to happen and the person has to be at least thigh-deep with both legs. Extricating a person from this takes at least two passersby, if not a full-fledged rescue team.

For more information on quicksand, other natural disasters and related topics, check out the links on the next page.

What does CERN mean for the future of the universe?
What if you traveled faster than the speed of light?
How Werewolves Work