Does rational science have room for irrational belief? 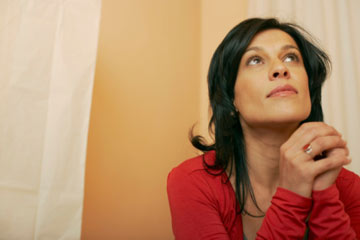 As many as 83 percent of Americans believe that God answers prayers. Scientifically speaking, this is an irrational belief.
Thinkstock/Comstock

Prayer is one of the most often polled non-political aspects of American life. How many Americans pray on a daily basis? Sixty-three percent, according to a 2010 Rasmussen Reports poll [source: RR]. A USA Today poll found that 83 percent of Americans believe that God answers prayers [source: Grossman]. In 2008, a Pew Research poll uncovered that 80 percent of the American population believe in miracles [source: Salmon].

People living in America today probably won't be surprised by those statistics; the U.S. is a religious country. But viewed through the lens of rational science, there are a lot of people in the United States who believe some patently irrational things.

Science and faith are commonly at odds. Hard science demands proof through the scientific method, where a hypothesis is put through methodical testing to determine whether it's true or false. Faith demands believers simply accept without proof. Yet, as divergent as rational science and scientifically irrational belief are, they've come together on a number of occasions as science has applied its method to test supernatural beliefs. In some cases, science has managed to find evidence of faith.

One of the most famous scientific studies of faith was conducted in 1988 by Randolph Byrd, a physician in San Francisco, Calif. Byrd conducted a methodologically sound study of the effect of intercessory prayer on patients recovering from heart surgery. Intercessory prayer is where one person prays on another person's behalf, generally to improve the second person's well-being.

Byrd's study was recreated several times with varying degrees of success. Yet, despite the mixed results that studies may come up with in investigating the supernatural, researchers continue to test more seemingly irrational hypotheses.

One favorite field of study is the search for hard evidence of life after death. As much as five percent of the U.S. population has had a near-death experience (NDE), where they've been clinically dead and claimed to have been conscious after being revived [source: Long]. The concept of NDEs as proof of life after death is a contentious one, but the detailed (and often commonly themed) reports of people who have died and returned to life have spurred some scientists to create studies to investigate them.

A study conducted in the Netherlands and published in 2001 in the British medical journal The Lancet is widely cited as a rigorous scientific study of the hypothesis that life may exist after death. After studying 344 patients who'd died of heart attacks and were revived in the hospital, the researchers found that 18 percent of them reported having a near-death experience. The researchers found that common elements of these experiences included an awareness of being dead and the presence of positive emotions [source: van Lommel, et al].

Studies of paranormal, supernatural and religious experiences tend to come up with varying results. One groundbreaking study that appears to provide proof an irrational belief is correct is often followed by replications that come up with contradictory evidence. Near-death experiences and intercessory prayer are just two of the seemingly irrational beliefs that humans hold. But as long as science maintains a duty to explore the universe, irrational beliefs like these will remain subjects of scientific inquiry.