Browse the article Why Conspiracy Theorists Are Obsessed With CERN 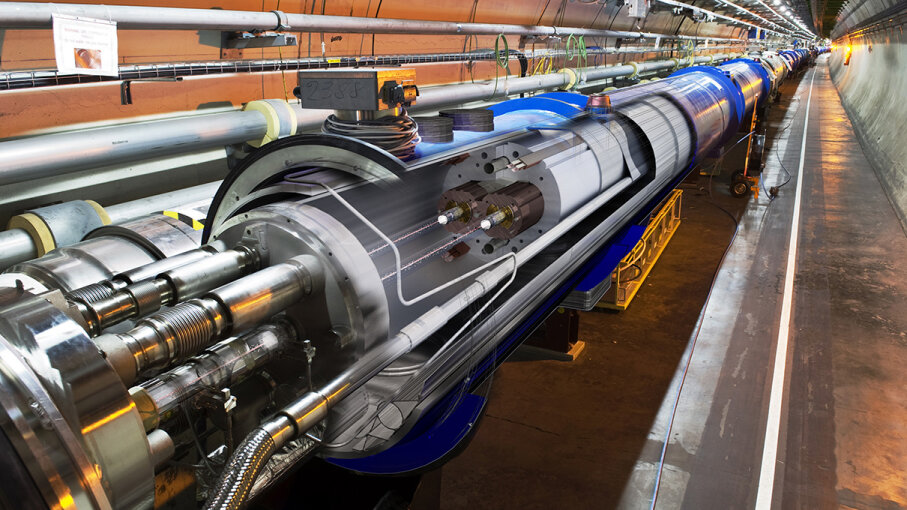 Conspiracies run rampant around CERN's Large Hadron Collider, including time-traveling birds trying to sabotage the machine, to the LHC itself opening up portals to other worlds, including a gateway to hell. Maximilien Brice/CERN

The European Organization for Nuclear Research, or CERN, was established in 1954 in Switzerland by 12 member states. Since then, it's swelled to 22 member states and has made dozens of important discoveries, including the Higgs boson, or "god" particle, and invention of the World Wide Web.

But a powerful scientific laboratory like this is ripe for conspiracy theories — especially after it turned on the Large Hadron Collider. For a while before it hit the "on" button, people feared the Large Hadron Collider might destroy Earth, being the largest machine in the world used to smash subatomic particles together. But alas, it still has not. While the kind of cutting-edge science discoveries made at CERN are thrilling, a number of theorists around the world still worry about the possibility of disastrous effects of the research. Stuff They Don't Want You To Know's hosts Matt Frederick and Ben Bowlin compiled and observed all the available data and theories they could find in this episode of the podcast Should We Be ConCERNed?

Particles are the microscopic elements that make up everything in the entire universe, and subatomic particles — like protons and electrons — are even smaller than atoms. What CERN is trying to find out is how the universe works by studying the building blocks of all matter, as well as the fundamental forces that make them work the way they do, like gravity. No small task.

In order to do that, scientists at CERN accelerate two high-energy particle beams (close to the speed of light) inside the Large Hadron Collider, which is supercooled by electromagnets to -271.3 degrees Celsius (-456.3 degrees Fahrenheit). Once the particles reach the proper speed, they are made to collide, and the scientists and physicists observe the results. These experiments have proven the existence of the Higgs boson, as well as helped us better understand the neutral particles called neutrinos.

But could the Large Hadron Collider and CERN also be at the heart of potentially planet-destroying experiments? Theories run rampant. When the collider was experiencing setbacks and delays in the early 2000s, some thought that perhaps a time-traveler from the future was returning to the past to deliberately sabotage it in order to prevent some disaster. This supposed time-traveler tried everything — including a time-traveling bird with a baguette — but the collider was turned on in 2012 anyway.

Other theories accuse CERN of causing earthquakes by sending plasma from Switzerland to Italy at high speeds, opening portals into hell or other dimensions, and shifting the world into an alternate timeline. In 2015, CERN even admitted it's attempted to create tiny black holes so scientists can study antimatter. CERN insists its research, including that of microscopic black holes, is perfectly safe, but some theorists believe it could cause a collapse of the entire universe.

So what else are the physicists and scientists at CERN getting up to in Switzerland? Could any of these speculations that its work could destroy the universe be true? And if so, why do they continue on? You'll have to take a quantum leap (har har) and listen to the entire podcast to hear more about CERN's inner workings and potential disasters it could cause, and to find out why there's a giant statue of Shiva The Destroyer, in the lobby.