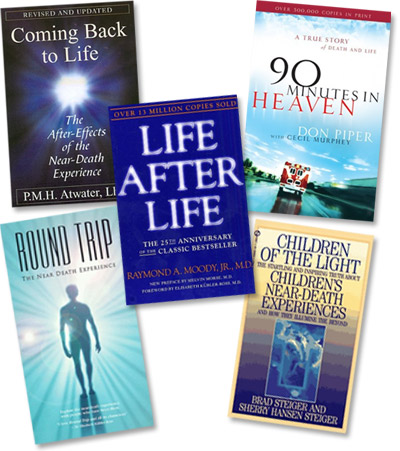 Books on NDEs include both first-person accounts and scientific studies.
HowStuffWorks

­ In 1982, pollster George Gallup, Jr. and author William Proctor released "Adventures in Immortality," a book about NDEs based on two Gallup polls specifica­lly addressing near-death and belief in the afterlife. This poll remains the most widely used source for statistics about NDEs.

Gallup and Proctor found that 15 percent of all Americans who had been in near-death situations reported NDEs. Of those, 9 percent included a "classic out-of-body experience," while 11 percent included entering another realm or dimension and 8 percent featured the presence of spiritual beings [ref]. Only 1 percent reported negative NDEs. But these numbers are more than 20 years old, and other researchers, whose studies are usually on a smaller scale, report statistics on NDEs that can vary widely from the 1982 poll.

A statistical analysis of more than 100 NDE subjects revealed that prior religious belief and prior knowledge of NDEs did not have an appreciable effect on the likelihood of having an NDE [ref].

Other research has focused on the effect an NDE has on the subject's life. Kenneth Ring, one of the most prolific researchers and authors of NDE studies, reports a large number of subjects who gain self-confidence and become more extroverted after an experience. One of Ring's studies quantified changes in subjects' attitudes toward life. These generally include a sense of purpose in life, an appreciation of life, and increase in compassion, patience and understanding and an overall feeling of personal strength. A small percentage of subjects reported feelings of fear, depression and a focus on death. Ring also found that NDE subjects tend to feel a heightened sense of religious feeling and belief in a spiritual world. However, he notes that this does not necessarily translate into an increase in church attendance -- it is more of an internal, personal increase in religious and spiritual feelings. Finally, people who go through NDEs often find that they do not fear death, and feel that a positive experience will be awaiting them when they actually die.

Next, we'll examine the spiritual and supernatural theories that seek to explain near-death experiences.

"In the most despairing moment, the little room began to fill with light...The light which entered that room was Christ; I knew because a thought was put deep within me, 'You are in the presence of the Son of God.' It was a presence so comforting, so joyous and all-satisfying, that I wanted to lose myself forever in the wonder of it…With the presence of Christ, every single episode of my entire life had also entered. There they were, every event and thought and conversation, as palpable as a series of pictures...and now a new wave of light spread across the room already so incredibly bright, and suddenly we were in another world. Or rather, I perceived all around us a different world occupying the same space...Of the final world I had only a glimpse. Now we no longer seemed to be on earth, but immensely far away, out of all relation to it. And there, still at a great distance, I saw a city, but a city...constructed out of light. Moving among [the buildings] were beings as blindingly bright as the One who stood beside me."

- George G. Ritchie, Jr., after nearly dying of a fever (from "The Vestibule" by Jess E. Weiss)