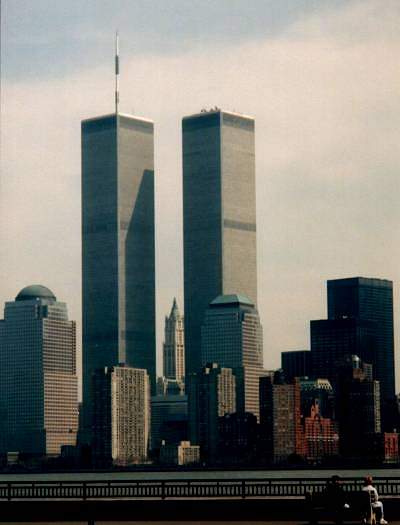 According to some believers, Nostradamus foresaw the city of New York and the attack that destroyed the World Trade Center towers. In several quatrains, he describes "the new city," often suggesting an attack on it. He also refers to "hollow mountains," which many believe to indicate skyscrapers.
Photo courtesy Wayne Lorentz: Glass, Steel & Stone

Following the terrorist attack on the United States on September 11, 2001, there was renewed interest in Nostradamus and his prophecies.

A lot of this interest was fueled by a series of e-mail messages. One anonymous message, widely circulated in the United States, claimed that Nostradamus foretold the destruction in some detail. The message included this quatrain:

In the City of God there will be a great thunder,


While the fortress endures, the great leader will succumb.


The third big war will begin when the big city is burning.

Ostensibly, the "two brothers" refers to the twin towers, the "fortress" refers to the Pentagon, the "great leader" refers to President Bush and "the big city" refers to New York. In fact, this quatrain is not the work of Nostradamus -- it is a complete fabrication.

According to Snopes.com, an urban legend information site, the first three lines were taken from an essay written a few years ago by Neil Marshall, then a student at Brock University in Canada. Supposedly, Marshall included the lines in the essay to demonstrate how Nostradamus pieced together general, vague images that could fit with a wide range of events. Apparently, someone picked up the verses from the Web, added an extra line and distributed the quatrain over the Internet. If these lines were written a few years ago, Nostradamus critics say, they support the case that Nostradamus had no special talent -- any vague prediction, even by a disbeliever like Marshall, has a good chance of connecting with later events.

Several other Nostradamus-related e-mail messages followed. One described "metal birds" crashing into "two tall statues," an image that does not show up anywhere in "The Centuries." Others referred to "the city of York," another invention meant to sound like Nostradamus. One widespread message included these lines:

In the year of the new century and nine months,

From the sky will come a great King of Terror.


The sky will burn at forty-five degrees.

While this quatrain, as such, is not the work of Nostradamus, it does include some of his verses. It is an adaptation of two different quatrains:

From the sky will come the great King of Terror.


To resuscitate the great king of the Mongols.


Before and after, Mars reigns by good luck.

At forty-five degrees the sky will burn,


In an instant a great scattered flame will leap up,


When one will want to demand proof of the Normans.

Many Nostradamus followers believe that both Quatrains refer to the attack on the World Trade Center. The references to fire and terror from the sky fits with the aerial attack, they argue, and New York city is around 40° 5' N latitude (relatively close to "forty-five" degrees). The date is also not far off. Additionally, several other quatrains refer to an antichrist figure called "Mabus," who supposedly will start a world war. The letters in Mabus can be rearranged to spell Usam B, leading some to believe Nostradamus saw the coming of Osama bin Laden.

Skeptics suggest that believers are paying attention only to the pieces that fit, and ignoring the parts that do not ("the great king of the Mongols," for example). Additionally, they argue that "the great new city" is a skewed translation of Nostradamus' lines. In the original French, Nostradamus referred to "Villeneuve," which literally means "new city," but is also the name of a town outside of Paris, near 45 degrees latitude. Critics credit the similarity of Mabus and Usama bin Laden to coincidence, noting that up until recently, many Nostradamus followers claimed Saddam Hussein was Mabus (Mabus spelled backward is Subam).

Despite these critics' arguments, Nostradamus is more popular than ever. Immediately following the September 11 attack, Nostradamus books climbed to the top of Amazon.com's sales list, and shot off bookstore shelves all around the country.

For more information on Nostradamus, his prophecies, his followers and his critics, check out the links below.