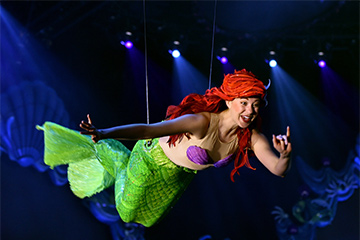 Arguably the most famous mermaid does her thing at a Disney park outside of Tokyo.
Yoshikazu Tsuno/AFP/Getty Images

Stories of the beautiful Atargatis date back to 1000 B.C.E. in Syria [source: Bellincampi]. She is a protector goddess, associated with water and new life. In one of her common backstories, she falls in love with a human man. As usual, this works out poorly for the mortal: Atargatis accidently kills her lover. In shame and agony, she throws herself in a lake, set on becoming a fish. Her feminine beauty, though, is too powerful, and the transformation fails midway. She ends up with the tail of a fish but remains a woman above the waist [source: Sea-thos].

Like Atargatis, mermaids may be benevolent protectors. They may be vulnerable, like the deeply suffering protagonist in Hans Christian Andersen's "The Little Mermaid," who gives up her tail to walk on land with the man she loves only to be cast aside, turning to sea-foam in her heartbreak. Disney's "Little Mermaid" Ariel, based on Andersen's character, suffers but is ultimately rewarded for her goodness and bravery with a happily-ever-after. Ariel is a hero mermaid.

On the other end of the spectrum, mermaids may be flat-out evil. In German myth, mermaids called nixes use music to lure men into their river in order to drown them, similar to the sweet-voiced sirens depicted in Homer's "Odyssey" [source: MarineBio Conservation Society]. (Sirens aren't mermaids, though; different creatures entirely.)

Mermaids are alluring and elusive, feminine and animal, protective and devastating. And imagined mermaids are almost always beautiful. It's the most obvious key to their allure. But in real life, the mermaid picture isn't always so pretty. One spotted near Indonesia in 1943 had the mouth of a carp.

The Male of the Species

Mermaids aren't the only fish-human hybrids. Mermen, too, have the upper bodies of humans and the lower bodies of fish, and they appear often in early religious symbolism and myth. The Greek god Triton, son of sea-ruler Poseidon, was a merman [source: Theoi]. In merfolk sightings and cultural symbolism, though, the female of the species is far more visible.