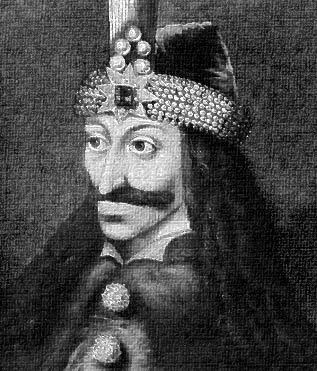 Count Dracula's namesake, Prince Vlad Tepes, was infamous for his viciousness on and off the battlefield.

Abraham (Bram) Stoker, a theater manager and part-time novelist, was not the first author to feature the vampire in a literary work, but his version is the one that really caught on. This is largely due to the novel's unforgettable villain, Count Dracula, as well as the foreboding setting. Stoker arrived at both elements through extensive research. He set much of the action in the mysterious mountains of the Transylvania province of Romania, and he based his vampires on eastern European and gypsy folklore.

Selectively sampling from several versions of the vampire myth and adding some details of his own, Stoker formed the standard for the modern vampire. Unlike the vampires in the eastern European tradition, Stoker's monster loses power in the sunlight, is repelled by crucifixes and has acute intelligence. Interestingly, Stoker's vampires do not have reflections, while many earlier vampire creatures were fascinated by their own reflection.

Stoker's research also turned up a name for his villain. The original Dracula was a real person, Prince Vladislav Basarab, who ruled Wallachia in the mid 1400s. His father was known as Vlad Dracul (translated as either "Vlad the dragon" or "Vlad the devil"), in recognition of his induction into a society called The Order of the Dragon. Vlad Jr. was sometimes referred to as Vlad Dracula, meaning "son of Dracul," but more often he was called "Vlad Tepes," meaning "Vlad the Impaler." This was in reference to Vlad's predilection for impaling his enemies on long wooden stakes.

The real Dracula had a reputation for unfathomable brutality (a reputation many Romanians claim is inaccurate), but there is not much evidence showing that people believed he was a vampire. Stoker's fictional villain is not closely modeled after the real Dracula, though they are sometimes linked in movies based on the book. Mainly, Stoker borrowed the name of the prince, as well as his social standing. Unlike the wandering, homeless strigoi, Stoker's vampire was a wealthy aristocratic type, hiding out in a grandiose castle.

In the 1927 play "Dracula," and the film adaptation that followed in 1931, Bela Lugosi embraced this aristocratic notion, playing the count as a suave, sophisticated gentleman. This play also introduced Dracula's familiar outfit -- black formal wear and a billowing black cape. In the novel "Dracula," the count is described as a withered, ugly old man, more like Max Shreck's portrayal in the 1922 silent film adaptation, "Nosferatu," than Lugosi's presentation. But the suave Dracula caught on, showing up in scores of vampire movies, television shows and cartoons.

The vampire has continued to evolve over the years, as novelists and filmmakers reinterpret and expand the mythology. In Anne Rice's popular novels, she takes vampires to the next level, giving them a conscience and a range of emotions. In her work, vampires are not necessarily evil -- they are presented as real, rounded people. On the television show "Buffy the Vampire Slayer," creator Joss Whedon has pursued similar ideas, exploring the idea of a vampire with a soul.

Academics have also maintained an interest in vampire lore and its roots. In the next section, we'll look at some modern theories of what might have inspired the vampire legend.

Throughout history, there have been a number of living people who exhibited vampire-like behavior. The most famous historical vampire was Elizabeth Bathory, a Transylvanian noblewoman who lived from 1560 to 1614. Bathory, who was terrified of aging, became convinced that bathing in blood (and perhaps consuming it) was the secret to maintaining a youthful appearance.

To this end, she tortured and killed hundreds of people, mostly young women. Eventually, she was tried for her crimes and imprisoned in a small room in her castle, where she died. See Court TV's Crime Library for more information on Elizabeth Bathory.