What Are Crop Circles? 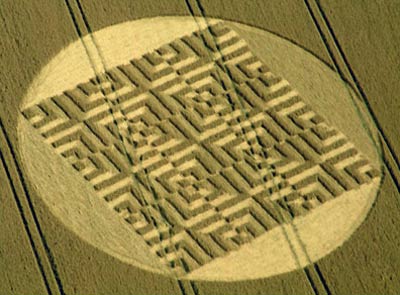 This "optical labyrinth" formation, located near Savernake Forest in Wiltshire, consists of 180 separate standing and flattened elements and is approximately 200 feet (60 meters) across.
Photo courtesy www.circlemakers.org

Crop circles are patterns that appear in fields. The pattern is created when certain areas of the crops are tamped down, but others are left intact. The edge is so clean that it looks like it was created with a machine. Even though the stalks are bent, they are not damaged. Most of the time, the crop continues to grow as normal.

Sometimes, the patterns are simple circles. In other instances, they are elaborate designs consisting of several interconnecting geometric shapes.

Farmers have reported finding strange circles in their fields for centuries. The earliest mention of a crop circle dates back to the 1500s. A 17th-century English woodcut shows a devilish creature making a crop circle. People who lived in the area called the creature the "mowing devil."

In an 1880 issue of the journal Nature, amateur scientist John Rand Capron reported on a formation near Guildford, Surrey, in the south of England. He described his finding as "a field of standing wheat considerably knocked about, not as an entirety, but in patches forming, as viewed from a distance, circular spots." He went on to say, "... I could not trace locally any circumstances accounting for the peculiar forms of the patches in the field ... They were suggestive to me of some cyclonic wind action ..."

Mentions of crop circles were sporadic until the 20th century, when circles began appearing in the 1960s and '70s in England and the United States. But the phenomenon didn't gain attention until 1980, when a farmer in Wiltshire County, England, discovered three circles, each about 60 feet (18 meters) across, in his oat crops. UFO researchers and media descended on the farm, and the world first began to learn about crop circles.

By the 1990s, crop circles had become something of a tourist attraction. In 1990 alone, more than 500 circles emerged in Europe. Within the next few years, there were thousands. Visitors came from around the world to see them. Some farmers even charged admission to their mysterious attractions.

Crop-circle enthusiasts call themselves cereologists -- after Ceres, the Roman goddess of agriculture. Most cereologists (or "croppies," as they are sometimes called) believe that crop circles are the work of either extraterrestrials or plasma vortices.