How Do You Make a Crop Circle? 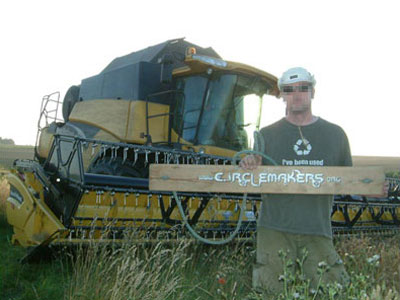 Circlemaker John Lundberg displaying one of the 'stalk stompers' (and standing in front of the combine) his team will use to create the formation.
Photo courtesy www.circlemakers.org

Crop circles appear to be very intricate formations, with many geometric shapes linked in sophisticated patterns. But the basics of crop-circle creation and the tools involved are actually fairly simple.

This is the resulting formation. Created in a field opposite Silbury Hill in Wiltshire, it took the team five hours to create.
Photo courtesy www.circlemakers.org

In August 2004, National Geographic contacted a team including circlemakers John Lundberg, Rod Dickinson and Wil Russell and requested a daylight demonstration in Wiltshire in support of a crop-circle documentary. These are the plans they worked from:

Circlemakers avoid getting caught by working under cover of night and by hiding their tracks in existing tractor-tire ruts.

Some circlemakers are turning their talent into a real business -- and making big profits from it. A team including artist and filmmaker John Lundberg, Rod Dickinson and Wil Russell travel all over the world making crop circles as advertisements for big corporations. Their client list includes a multibillion dollar computer-chip company, a car manufacturer and a digital television company. Although they won't divulge exactly how much they make per crop design, their budgets are in the hundreds of thousands of dollars.