Anna and the Skull 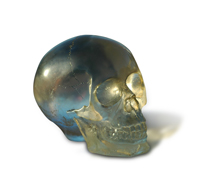 Strangely, F.A. Mitchell-Hedges only documented the skull once, in "Danger, My Ally," a book that he wrote describing his adventures. Near the end of the book, Mitchell-Hedges states that the crystal skull is a "skull of doom" that dates "back at least 3,600 years, and taking about 150 years to rub down with sand from a block of pure rock crystal." He also goes on to say that "several people who have cynically laughed at it have died, others have been stricken and become seriously ill [...] How it came into my possession, I have reason for not revealing" [source: Mitchell-Hedges]. Mitchell-Hedges doesn't make any mention of his daughter's presence at Lubaantun in the book, nor does he give her credit as the finder of the skull.

Two friends of Mitchell-Hedges who came along on the excavation of Lubaantum, Lady Richmond Brown and Dr. Thomas Gann, never spoke or wrote of the skull. Anna isn't present in the many photographs of the dig at Lubaantun, either. Mitchell-Hedges died in 1959, and Anna has kept the skull ever since. She toured with the skull and gave many talks and interviews. In many accounts, she gave the date of discovery as 1924 and 1927. These dates don't match her father's account of his time in Lubaantun, which he states "ended late in 1926" [source: Mitchell-Hedges].

Next, we'll look at the history of some other crystal skulls.

Anna has retired from touring with the skull and lives in the United States. She continues to give interviews and still holds to her claims of the skull's discovery and power. In a 1983 letter to Joe Nickell, Anna stated that the skull had been "used for healing a number of times" and hopes it "will go to an institution where it will be used by mathmeticians [sic], weather people, surgeons, etc." [source: Nickell].