Browse the article The Famous 'Wow!' Signal Probably Wasn't Chatty Aliens After All 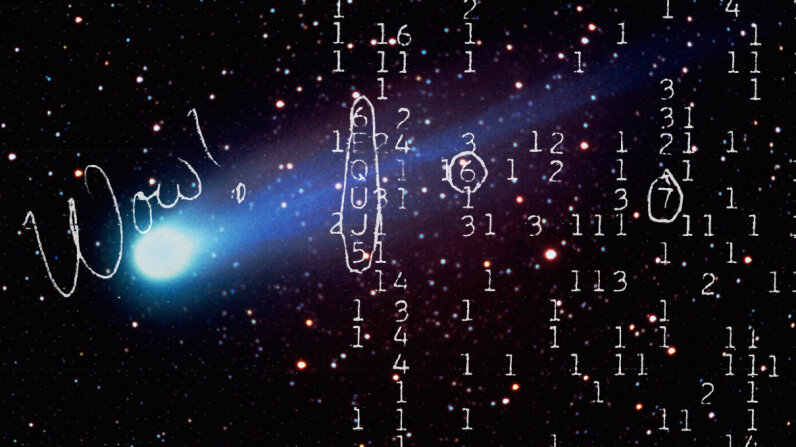 It's hard not to be a little disappointed that a comet seems to have been behind the Wow! signal. Wikimedia Commons/Art Montes De Oca/Getty

It looks like one of the most famous signals in the history of searches for intelligent extraterrestrials wasn't triggered by chatty aliens after all – it was likely caused by a mischievous comet that was in the wrong place at the wrong time.

On Aug. 15, 1977, Ohio State University's Big Ear radio telescope was fixed on three star systems called Chi Sagittarii in the constellation of Sagittarius as part of a SETI (search for extraterrestrial intelligence) project when it detected something weird.

For 72 seconds, a powerful burst of radio waves erupted from deep space. On reviewing the computer printout from that observing session a few days later, astronomer Jerry Ehman noticed the strange clump of letters and numbers. To the untrained eye, the digits are nothing more than a random computer burp. But to Ehman, the message was clear: An unprecedented narrowband radio signal had been received from deep space, and it looked artificial. Excited by the find, Ehman circled the cluster of letters and numbers, writing an exuberant "Wow!" on the printout.

"I mean, without thinking, I wrote "Wow!"" Ehman recalled during a 1994 interview. "It was the most significant thing we had seen."

As time went on, Ehman became skeptical that Big Ear had detected an alien transmission, saying: "Even if it were intelligent beings sending a signal, they'd do it far more than once." After dozens of investigations into that same region, he had settled on the idea that the signal was more likely a radio signal bouncing off space debris, like a defunct satellite, than anything SETI related.

Astronomers exhaustively continued to seek out natural explanations, but the popular view of the signal always tended toward the improbable (yet possible). Nearly four decades later, the "Wow!" signal has remained the most captivating pieces of evidence that alien life – an intelligent, transmitting alien civilization, no less – might exist in our galaxy.

But over the years, SETI astronomers have been frustrated by the lack of replication. Science is a stickler for replicating results, so while the Wow! signal was certainly interesting, until more Wow! signals are found, the 1977 detection was nothing more than an anomaly and a mysterious addition to the SETI annals.

Last year, however, Antonio Paris, an adjunct professor at Florida's St. Petersburg College and a former analyst for the U.S. Department of Defense, had an idea that would assess the Wow! signal's cause and, from November 2016 to February 2017, he tested his hypothesis.

Paris had been trying to find alternatives to the "alien explanation" of the Wow! radio burst, and he realized that the explanation might be a little closer to home.

Big Ear was tuned to a very specific radio frequency for good reason. The universe is filled with neutral hydrogen and, in this natural state, radiates radio waves at a frequency of 1420 megahertz. Any self-respecting alien astronomer would know this. By SETI logic, if we know 1420 megahertz is the most abundant radio emission in the known universe and they also know it, perhaps it is the perfect frequency to transmit on as there is some guarantee that other intelligent beings are observing at that frequency. There's an entire electromagnetic spectrum to transmit from, why not narrow down the odds from the get-go?

However, Paris pondered another possible emitter of 1420 megahertz radiation: comets. Comets contain large quantities of water ice and therefore release neutral hydrogen gas into space as they orbit the sun. At the time of the Big Ear observation, there were no known comets in the Chi Sagittarii observing region. But many comets have been discovered since then – might an undiscovered comet have "photobombed" the Big Ear 1977 observations?

Paris identified two cometary candidates, comets 266P/Christensen and 335P/Gibbs, which were discovered in 2006 and 2008 respectively that, after historic orbital analysis, would have placed them in the general vicinity of Chi Sagittarii on Aug. 15, 1977. And it just so happened that 266P/Christensen was soon making a return visit to the same patch of sky. So, between November 2016 and February 2017 an exhaustive observing campaign was carried out. This time, the detection was replicated, and it appears that aliens had nothing to do with the infamous Wow! signal.

"The investigation discovered that comet 266/P Christensen emitted a radio signal at 1420.25MHz," Paris writes in a study published in the Journal for the Washington Academy of Science. "All radio emissions detected were within 1° (60 arcminutes) of the known celestial coordinates of the comet as it transited the neighborhood of the "Wow!" Signal."

In short, this could be the last nail in the coffin for the alien explanation of the Wow! signal.

"The results of this investigation, therefore, conclude that cometary spectra are detectable at 1420 MHz and, more importantly, that the 1977 "Wow!" Signal was a natural phenomenon from a solar system body," Paris concludes, bluntly.

Now That's Interesting
Big Ear made it into the Guinness Book of Records for its long-running, full-scale SETI project, which began in 1973 and ended in 1997.