What is the Plain of Jars? 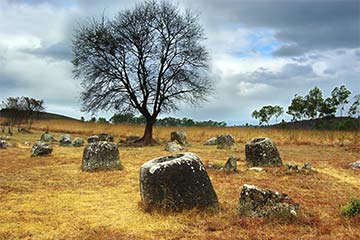 No one knows what the vessels in the Plain of Jars were really used for.
vidalidali/iStock/Thinkstock

It can be frustrating to think we've found everything the world has to offer. No surprise continents pop up any more, Columbus-style. Sure, we might find some exotic new species of squid in the depths of the ocean, but it's not like exploring the Marianas Trench led us into any time/space wormholes. The world, it seems, has become ho-hum.

When you find yourself becoming cynical about exploration and discovery on planet Earth, it might be healthy to remind yourself that some pretty wacky mysteries still stump humanity's greatest minds. It's a bit astonishing to think that only in 2014 did we add one more piece to the Stonehenge puzzle, for instance, when it was discovered there was likely a much larger complex of monuments than the ones we currently see [source: Smith]. And that still didn't really tell us who the heck built the thing or what they did with it.

Equally mysterious is the Plain of Jars, located in the Xieng Khouang area of Laos. It's not really a plain, because the gigantic jars (some as high as 10 feet or 3 meters) are scattered in several different locations -- sometimes a few at a time, and sometimes hundreds in one place. In fact, there are thousands altogether, if you count all the fragments and pieces of lids [source: Eaves].

The stones, which appear to be about 2,000 years old, were first scrutinized by Western researchers in the 1930s. French archaeologist and natural historian Madeleine Colani began exploring and excavating around the stones, finding evidence that they were largely used for funerary purposes. She posited that the jars were actually like urns, holding cremated ashes. While Colani had a compelling theory, it's still just that. Other archaeologists have wondered whether the jars were used for secondary burials and have posited that perhaps the jars aren't as old as previously thought. A local legend says the jars were used for victorious winemaking after a battle for independence in the region 1,500 years ago [source: Ciochon and James].

One thing is for sure: The Plain of Jars needs protection. During the conflicts of the 1950s, '60s and '70s, Laos became the most bombed country per capita. Unexploded bombs and mines threaten a whopping 25 percent of the Xieng Khouang Plateau [source: UNESCO]. Here's hoping that increased stability will allow for more study of the Plain of Jars, making it one less mystery in the world.