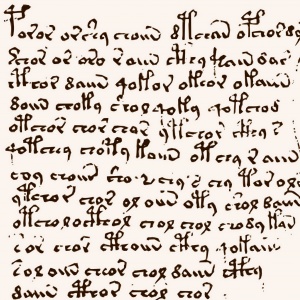 There’s no consensus as to whether the text in the Voynich manuscript is even an actual language or just nonsense characters.
©Universal History Archive/UIG via Getty images

Altogether, there are about 30 different characters in the supposed alphabet that makes up the text in the Voynich. They're full of graceful loops and curves, and for all anyone knows, they might represent letters or perhaps numbers. In sum, there are roughly 170,000 words in the book, all featuring immaculate handwriting with none of the mistakes or scribbles that one would find in many documents from the same era.

Based on variations in the illustrations, the book can be divided into six different sections, with the topics divided between medicine, recipes, herbs, astronomy, human biology and cosmology. Tellingly, certain words appear only in correlation to specific sections of the text, implying that each bit of subject matter had its own vocabulary, which is what happens in real books with real meaning.

Researchers don't understand the script at all, so they can't even say for sure that the script makes up what we would call words or sentences. But it's not just random characters strewn throughout the pages. There are patterns in the characters that seem to follow a structure that's similar to known languages.

For instance, there are words scattered through the paragraphs in ways that mimic other languages. There's also a particular character that's seen only in the first lines of particular paragraphs. Those kinds of structures would've been challenging — but not impossible — to fake, particularly back in the 1400s.

And then, of course, there are the illustrations. The pictures within the manuscript have a hallucinatory quality that seems to detach them from reality, particularly the dozens of plants that grace the pages. There are spindly vines that appear to morph into human organs or faces. Many others look like the author copied and pasted various portions of multiple plants to make up altogether new species. There are a handful that botanists think they've identified, but given the rough nature of the drawings it's impossible to be certain.

There are also pictures showing just parts of plants, perhaps indicating medicinal or culinary value. These are sometimes accompanied by jars that a doctor of the day would have used to dispense rudimentary drugs.

Another section features many astronomical designs with stars and moons sometimes arranged in spirals and circles, complete with notations. On other pages, naked women lounge in tubs holding stars aloft while admiring a nice goat. We are only partially kidding.

One of the more famous pictures is of a series of rather surprised looking (and possibly pregnant) naked women supporting individual pieces of what looks like a plumbing or irrigation system. To the contemporary eye, these depictions are a bit bizarre, but more than anything they're just puzzling.

The point is, there are some seriously weird pictures in the Voynich manuscript. Just as with the text, no one really knows what the images are supposed to portray exactly.