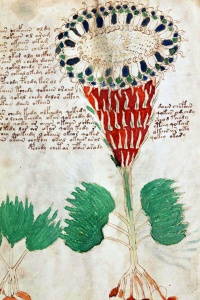 The (possibly) botanical illustrations in the manuscript have been studied at length for similarities to known plants.
© Universal History Archive/UIG via Getty images

The Voynich manuscript's slippery origins mean scientists don't have much of a reference point for starting their investigations into the text's meaning. Although many believe it was made in Europe, others think that the book originated in Asia or even all the way across the ocean in Mexico or South America.

Without a solid geographic origin, researchers don't have the kind of cultural cues that would be helpful for their investigations. What they're left with is a whole lot of abstraction and speculation.

After more than 100 years of inquiry, there seem to be three main theories regarding the meaning of the book's contents. One, it could be written in a language that scholars have never seen before. Two, It might be a cleverly coded message that actually corresponds to a language with which we are already familiar. Or three, it could just be a bunch of neat scribbles, a concocted bunch of hooey that really means nothing at all.

It could also be the ramblings of an artful person with a serious mental illness. Maybe an autistic monk with a flair for the mental acrobatics necessary for such a complex document assembled it. There is also a theory that the text could be a type of glossolalia, in other words, speaking in tongues but put to pages instead of uttered aloud.

And then, of course, there could be trickery afoot. A lot of experts believe the manuscript is likely a hoax. They point to certain passages, such as those where the same words occur two or three times in a row, as well as the fanciful illustrations of plants, most of which look as if they belong in fairy tales instead of the real world. At least one statistical analysis indicated that the composition of the text was more similar to senseless gobbledygook than anything meaningful.

Perhaps someone created it to mock or challenge academic types. Or maybe it was meant to be a puzzling piece of art that would garner attention and bring wealth to the creator.

It bears noting that art hoaxes weren't uncommon in the 1400s. However, most scams were on the simplistic side and certainly nowhere near the scale and complexity of the Voynich. Furthermore, in an age when books took months to create, why would anyone put so much effort into a fake? And why would the trickery be designed to be so confusing? If no one at all can possibly understand a piece of work, why put the time into making it?

Those are the kinds of questions that keep researchers, both amateur and professional, up late at night.