What if Neanderthals were still alive? 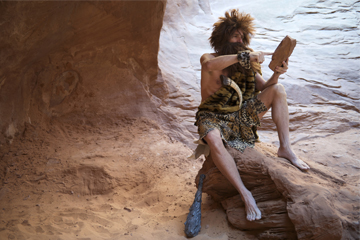 Lucy pushes an untidy mop of red hair away from her brow and puzzles for a moment over the problem she faces. Although she has a large brain and is quite strong, some things remain just beyond her abilities. Take the tablet she's pondering -- were it of the stone variety, she could imagine any number of things to do with it. She might carve the likeness of a wild animal onto its face, or break it into smaller pieces to sharpen and use for hunting. But this tablet, with its gleaming electronic visage and brightly colored icons, confuses this Neanderthal confronted by modern conveniences.

The idea that members of an ancient race predating humans could coexist today creates odd hypothetical scenarios. But what if Neanderthals were still alive?

Turns out, the genomes of Neanderthals still walk Earth — as part of the human race. An analysis of the DNA of 379 Europeans and 286 East Asians revealed genomes not characteristic of modern humans. Scientists compared that DNA with DNA taken from Neanderthal fossils and found a close match. They also considered the timeline of when this Neanderthal DNA entered the Homo sapiens lineage and discovered it happened about 50,000 years ago, around the time modern humans and Neanderthals are believed to have mated. As a result of the study, researchers surmised some humans could be carrying as much as 40 percent of the Neanderthal genome. However, they were able to identify only about 20 percent in the study [source: Vernot and Akey].

A separate study discovered that some of these Neanderthal genes resulted in adaptations that were both beneficial and detrimental for modern humans. Some people who inherited Neanderthal genes may, for example, have skin or hair that more readily protects them against cool weather. Others may develop maladies that can be associated with Neanderthal genes, such as Type 2 diabetes, Crohn's disease, lupus and more [source: Dutchen].

Before you start eyeballing people at work or the supermarket -- or in the mirror -- wondering if you're actually looking at a modern partial Neanderthal, consider this: Scientists have enough genetic information to theoretically create organs, or even an entire person, of Neanderthal origins. Scientists have recovered a nearly complete DNA sequence from a Neanderthal woman who died some 30,000 years ago in what is now Croatia. Just think: Someday you could walk among the Neanderthals, just as the earliest modern humans once did -- and realize that history really does repeat itself [source: Edwards].

How CERN Works
Has 'light as a feather, stiff as a board' ever worked?
What if we had two suns?