What if there were no bees? 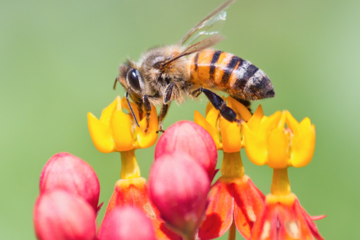 Bees may bug you, but they're essential to our environment.
Sumiko Scott/Moment/Getty Images

It's a beautiful day for a picnic, but minutes after you spread a blanket on the grass and unpack an impressive selection of sandwiches, fruit salad and a show-stopping cherry pie, you discover an uninvited guest. A bee is making the rounds, buzzing around your head and scaring all your friends. You're about to swipe at the winged interloper with your shoe, but then think better of it.

It's a good thing, too, because bee populations are dwindling. Consider these United States Department of Agriculture (USDA) survey results, based on 21.7 percent of the 2.6 million bee colonies in the United States. During the 2013-2014 winter, more than 23 percent of honeybees in the managed colonies included in the survey had died. The winter before that was even worse, when more than 30 percent of the hives died [source: Jones].

And honeybees aren't the only bees at risk. There are more than 20,000 species of bees in the Hymenoptera order that are crucial to life as we know it [source: Encyclopedia Britannica]. So what would happen if there were no bees at all?

Bees rely on pollen and nectar from plants for food. The nectar is later transformed into honey and the pollen is transferred from plant to plant as the bees travel, resulting in cross-pollination. In fact, bees pollinate as much as 70 percent of the planet's top 100 food crops, including apples, avocadoes, cucumbers, nuts, squash and more [source: Greenpeace].

Many of the diverse flavors and nutritional components in our food are the direct result of bees at work. And, without the crucial role bees play in agriculture, the world's food supplies would likely suffer. That's because an estimated one-third of all the food we eat relies on bees to flourish. Some of the foods we eat simply wouldn't exist without bees. Almonds, for instance, rely entirely on bees for pollination. In California alone, the almond crop needs 1.4 million bee colonies for successful pollination [source: USDA].

If there were no bees, our food supply would be less varied and less available. While we might not go extinct, we would certainly need to find edible alternatives to many of the mainstay foods we currently enjoy -- particularly those crops dependent on bees for pollination -- and figure out ways to stave off economic hardship and famine until new cultivation methods could be developed.