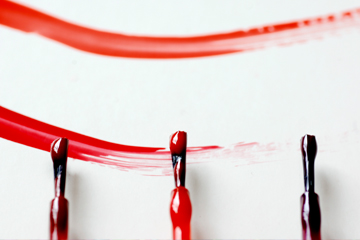 From a health perspective, painting your walls with nail polish is not a good idea (and it would be really expensive).
Laine Riss/Getty Images

You're leafing through a fashion magazine, your eyes landing on an ad for a new line of nail polish. You look up, and the vibrancy on the page contrasts with the dullness on the white walls of your living room. You've got a spare afternoon, so how about it: What if you painted the room with nail polish?

First, you'd probably spend more than you'd like. Depending on the brand, a half-ounce bottle of nail polish retails for $5 to $10. (Getting really fancy will cost you. In 2014, the designer Christian Louboutin released a nail polish that cost $50 [source: La Ferla]. Black Diamond King, a nail polish from Azature with 267 carats of black diamonds, costs $250,000 [source: Divirgilio].) You're looking at 256 half-ounce bottles and more than $1,200 to get the same quantity as a $40 gallon of paint, so you'd need a generous bulk discount to get those costs anywhere near one another.

Beyond the untold hours you'd spend painting that room with that tiny brush, keep in mind that those little bottles of chic contain cocktails of toxins. Chemicals like ethyl acetate, butyl acetate, toluene, dibutyl phthalate (DBP) and formaldehyde — experts call the trifecta of those last three the "toxic trio" — are used to prevent cracking, prevent the polish from washing off under water, and lend it its other characteristics. Some cosmetic companies have phased out these chemicals and begun offering up toxin-free alternatives, but there's still good reason to be suspicious of what's inside. In 2011, the California Department of Toxic Substances Control randomly collected 25 nail care products used in nail salons around San Francisco, and their inspection revealed that many products contained the chemicals that their toxin-free labeling denied: 10 of 12 products claiming to be toluene-free, for example, contained toluene [source: California EPA].

Considering how much nail polish you'll be slathering all over those walls, you'll be breathing huge amounts of barely pronounceable chemicals right into your lungs, which isn't good for your health. Inhaling large amounts of toluene, for example, can wreak havoc on the central nervous system, resulting in symptoms that include slower breathing and heart rates, drowsiness, hallucinations, nausea, developmental problems in the children of mothers exposed to the chemical and even death [source: EPA]. Over longer spans, people who inhale a lot of nail polish fumes can eventually be stricken with chronic solvent-induced encephalopathy — a condition alternatively known as painter syndrome — which can cause permanent walking and speech problems, memory loss, sleep disorders and other symptoms [source: MedlinePlus].

Sure, opening a window to ensure adequate ventilation and using a respirator would dull some of these effects. But the better alternative for your lungs and your wallet would be getting some low-VOC paint, putting down a drop cloth and doing it the old-fashioned way.