Browse the article How SETI Works

Are we alone in the universe, or are there intelligent beings out there with whom we could communicate? We may never know if we rely on space travel -- distances between the stars are unimaginably vast, and our most advanced ideas for space rockets, such as light propulsion, nuclear propulsion, solar sails and matter-antimatter engines, are many years away from becoming reality.

How can we detect signs of extraterrestrial (ET) life? One way is to basically eavesdrop on any radio communications coming from beyond Earth. Radio is not only a cheap way of communicating, but also a sign of a technological civilization. Humanity has been unintentionally announcing its presence since the 1930s by way of the radio waves and television broadcasts that travel from Earth into outer space everyday.

The Search for Extraterrestrial Intelligence (SETI) is conducted by dedicated scientists everyday. In the movie "Contact", Jodie Foster's character, Ellie Arroway, searches the heavens with several large radio telescopes. When she receives a radio message from a distant star, there are profound implications for humanity.

SETI is an extremely controversial scientific endeavor. Some scientists believe that it is a complete waste of time and money, while others believe that detection of a signal from ET would forever change our view of the universe. In this article, we will examine the SETI program. We'll look at how radio telescopes work and how they are used for SETI searches, what the probabilities of detecting alien life are, what might happen if or when such a signal is detected and how you can participate in SETI yourself.

Radio spectrum, showing the window, or "water hole," in the microwave region

The universe is an awfully big place. How can you best search the huge sky for a radio signal from ET? There are three basic dilemmas:

Large vs. Small Areas of Sky

Because the sky is so big, there two basic approaches to SETI searches:

When you're in an unfamiliar area and want to find a station on your car radio, you have to turn the dial until you pick something up, or press the "search" or "scan" button if your radio has these features. Well, the question is, where might ET broadcast? This is perhaps the biggest challenge for SETI researchers because there are so many frequencies -- "billions and billions," to quote Carl Sagan. The universe is filled with radio noise from naturally occurring phenomena, much like a summer night is filled with the sounds of crickets and other insects. Fortunately, nature does provide a "window" in the radio spectrum where the background noise is low.

In the 1- to 10-gigahertz (GHz) range of frequencies, there is a sharp drop in background noise. In this region, there are two frequencies that are caused by excited atoms or molecules: 1.42 GHz, caused by hydrogen atoms, and 1.65 GHz, caused by hydroxyl ions. Because hydrogen and hydroxyl ions are the components of water, this area has been called the water hole. Many SETI researchers reason that ET would know about this region of frequencies and deliberately broadcast there because of the low noise. So, most SETI search protocols include this area of the spectrum. Although other "magical" frequencies have been proposed, SETI researchers have not reached a consensus on which of these frequencies to search.

Another approach does not limit the search to any one, small range of frequencies, but instead builds large, multichannel-bandwidth signal processors that can scan millions or billions of frequencies simultaneously. Many SETI projects use this approach.

The number of radio telescopes in the world is limited, and SETI researchers must compete with other radio astronomers for time on these instruments. There are three possible solutions to this problem:

The SERENDIP Project piggybacks an extra receiver onto a radio telescope (Arecibo) that is used by someone else. The SERENDIP researchers then analyze the signals acquired from the target of interest. Project SERENDIP takes advantage of large amounts of telescope time, but its researchers do not have control over which targets are studied and cannot conduct follow-up studies to confirm a possible ET signal.

The Allen Telescope Array is a new radio telescope being built by the SETI Institute. Located northeast of San Francisco, in the "radio quiet area" of the University of California at Berkeley's Hat Creek Observatory, the array will be dedicated entirely to SETI, using hundreds or perhaps thousands of backyard-type satellite dishes to collect radio signals by interferometry (see the section Dishes for the Sky for information on radio telescopes). The Allen Telescope Array is projected to cost about $26-million.

Several SETI projects have been conducted since 1960. Some of the major ones are:

For details on these and other SETI projects, see the Links section at the end of the article.

If a signal is detected, there are a series of steps that follow to confirm that the signal is extraterrestrial:

Once a signal has been confirmed, there are very specific steps that must be followed in the release of this information (see SETI Institute: Declaration of Principles Concerning Activities Following the Detection of Extraterrestrial Intelligence for details). The movie "Contact" has a good depiction of the detection of an ET signal and subsequent events.

What are the possibilities that we will find ET signals? To address this issue, astronomer Frank Drake introduced an equation to calculate the number of ET civilizations in the galaxy in 1961. The equation, now referred to as the Drake Equation, considers astronomical, biological and sociological factors in its estimates:

The Drake equation has been a guideline in SETI research. The value of N has been calculated to be anywhere from thousands to billions of civilizations in the galaxy, depending upon estimates for the other values.

If we use the estimates listed above, and decide R* equals 40 , then the drake equation becomes:

As you can see, the results of the Drake equation are highly dependent upon the values that you use, and values of N have been calculated at anywhere from 1 to in the thousands. Some aspects of SETI and general astronomical research have been devoted to gathering data for reliable estimates of the terms in the Drake equation, such as the number of extrasolar planets. See the Links section for more details on the Drake Equation.

The Nobel Prize-winning physicist Enrico Fermi reasoned that if it takes life billions of years to develop intelligence and signal or travel to the stars, and if there are billions of worlds in the universe, and if the universe is over 13-billion years old, then why haven't we been visited by ET, or why isn't the galaxy crawling with ETs? This argument has been used to question the value of SETI, and author David Brin has expanded upon it in an essay called "The Great Silence" (see "Are We Alone in the Cosmos?: The Search for Alien Contact in the New Millennium"). 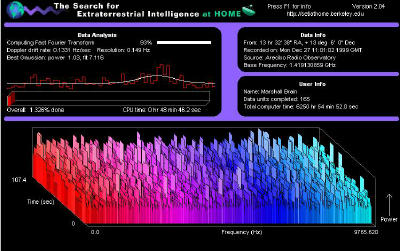 In 1999, University of California at Berkeley scientists Dan Werthimer and David P. Anderson worked on Project SERENDIP. They recognized that a limiting factor in analyzing the data from the Arecibo dish used by SERENDIP was the available computing power. Instead of using one or more large supercomputers to analyze the data, many smaller desktop PCs could be used to analyze small pieces of data over the Internet. They devised a screensaver program called SETI@home that could be downloaded from UC Berkeley over the Internet and reside on a participant's home computer. The program can work in residence or as a screensaver.

Here's how the project works:

The screen saver is divided into three sections: the data-analysis window (upper left), the data/user information (upper right) and the frequency-power-time graph of the data as it is being analyzed (bottom). The chunk of data is analyzed by spreading the data out over many channels using a mathematical technique called a Fast Fourier Transform (FFT). If the data are random, then the signal in all of the channels will be equal. If a signal (spike) is present, then one or more FFT channels will stand out above the rest, above a certain power-level threshold. Next, the program looks to see if the frequency of any spike is shifted slightly to other frequencies -- this shift would be caused by the Earth's rotation, indicating that the spike is of extraterrestrial origin. Finally, since the Arecibo dish is stationary -- does not track objects with the Earth's rotation -- an ET signal would drift over the dish's surface, from edge to center to edge, and a plot of the spike over time would look like a bell-shaped curve. The program tests to see if the spike fits this curve. If these three criteria are met, the program flags the information for later analysis by UC-Berkeley.

The data/user information section of the screen contains the notes on the observations that obtained the data chunk, as well as notes on the user.

The graph screen allows the user to see the progress of the analysis at a single glance. The program notes all of the observed spikes and relays this information back to UC Berkeley for further analysis. Each data set is processed independently by two users for corroboration. If a spike passes the criteria for a possible signal, then other SETI projects will examine the coordinates in greater detail to confirm the finding.

With SETI@home, a computer and an Internet connection, you can participate in SETI research. To date, the SETI@home Web site receives one-million hits and 100,000 unique visitors per day.

Some forms of the Drake equation add an additional term after R* -- fs, for the fraction of stars formed that are sun-like stars. Non-zero values of fs vary between zero and 1, but are estimated at 0.1 or 10 percent.

The Future of SETI

It appears that the public is greatly interested in SETI research, if interest can be gauged from the monetary support of private foundations like the SETI Institute and the SETI League and participation in SETI@home. The future of SETI looks bright, with developments in the following areas:

The possibility of intelligent life existing elsewhere in the universe has intrigued humanity for thousands of years. We are currently at a time when our technology has advanced enough for us to detect signals from ET and even broadcast our own signals to the stars. With the advancements in technology and the increasing interest in SETI, we may be close to finding the answer to that age-old question, "Does intelligent life exist out there?"

Dishes for the Sky

Interferometers combine images from several radio telescopes to make one image that looks like it was taken from one large dish.

If ET is communicating by radio, how can we detect such signals? Radio signals are waves of light, like visible light, infra-red light (heat) and X-rays. But radio signals have longer wavelengths than these other forms of light. To detect ET radio signals, you use a radio telescope. A radio telescope is a radio receiver similar to the radio that you have in your house or car. It has the following parts:

Diagram of the parts of a radio telescope (Cassegrain design).

Hover over the labels for a call-out of each piece.

In general, large radio telescopes allow you to detect weak signals and resolve them -- so, the larger the dish, the greater the resolution of the signal. However, large dishes are difficult and expensive to construct and maintain. To get around this problem, radio astronomers use a technique called interferometry. Interferometry combines the signals from several small radio telescopes spread out over a large area to achieve the equivalent of one large dish over the same area (see the links on the next page for details on interferometry).

For more information about SETI and related topics, check out the links on the next page.