Watch: The Chemistry of Sparklers Explained in Slow-motion Video

When the United States celebrates its Independence Day, focus turns to topics both serious and lighthearted. While the long July 4 weekend prompts thoughts of the meaning of democracy and representative, republican government, it also inspires family gatherings, grilled food and festive displays of celebratory fireworks.

But while many people have engaged in shooting off a bottle rocket or marveling at explosive spectacle high in the sky, one of the most common forms of firework is the humble sparkler. The fine folks at the American Chemical Society have put together an easy-to-understand video about sparklers featuring some pretty cool slow-motion action.

Check it out above, and you'll learn about the thin iron spear sheathed in combustible paste that's so popular at holiday times. Fuel sources for sparklers can be iron, titanium, aluminum and magnesium and more.

And what exactly sparkles in a sparkler? It's powdered metals catching fire, and what you see fly off into lovely sparkles are actually tiny ignited fragments of metal. They're also super hot — from 1800 to 2900 degrees Fahrenheit (1000 to 1600 degrees Celsius), but burn up quickly due to their microscopic size.

What's the binder that keeps the powdered metal from just flaking off of the metal rod? The most commonly used binder in sparklers is dextrin, and not only does it give shape to the combustible material, it also slows down the ignition reaction. It's what keeps the full sparkler's burn slow and steady, and without it the whole experience would be a lot quicker, and a little more violent. So enjoy the sparkle, but keep fingers away until the glowing iron ember remaining has completely cooled.

Sparklers are a favorite holiday firework, and their different colors are due to different metals in the combustible paste.
Lakruwan Wanniarachchi/AFP/Getty Images
Now That's Interesting
Though they may seem mild compared to other fireworks, sparklers are the most-frequent cause of fireworks-related injury in the U.S.

The Positives of Princess Culture 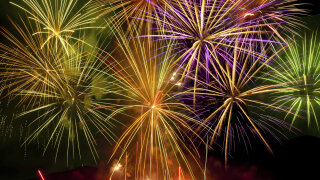 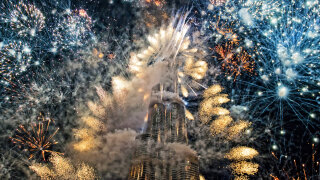 How do fireworks explode in different shapes?