How Snus Differs from Other Tobacco 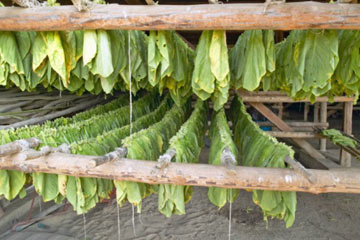 In snus, tobacco leaves are ground and pasteurized, while the leaves in most other tobacco products are left to air-dry to bring out their natural flavor.
Joe Sohm/Getty Images

The process of heating ground snus tobacco below the point of combustion is called pasteurization, and it's what distinguishes snus from other types of tobacco. In most forms of tobacco production, the leaves are left to air-dry in order to bring out their natural flavor. Air-drying tobacco leads to fermentation in which the plant's nitrogen microbes fuse with oxygen ions in the air. Fermentation brings out naturally occurring ammonia in the tobacco, increasing its acidity and allowing the body to absorb nicotine more efficiently. Because it's pasteurized, snus tobacco has less ammonia.

Snus users have to be more patient to get their nicotine fix. That's the trade-off for removing a cleaning product from your tobacco. One 2-gram portion of snus gives a boost in blood nicotine concentration of around 15 nanograms (one-billionth of a gram) per milliliter of tobacco within 30 minutes. In contrast, a cigarette delivers about 23 nanograms per milliliter of nicotine in the first five minutes, but by 30 minutes the levels of nicotine in the body are comparable between the two products [source: Gartner et al.].

To substitute for the flavor that's lost in the pasteurization process, snus manufacturers add lots of salt and sodium bicarbonate, commonly known as baking soda. Baking soda helps release nicotine (whereas ammonia helps release nicotine in other tobacco products). This means that snus is just as addictive as cigarettes. But, as any heavy coffee drinker would argue, addictiveness alone doesn't necessarily make a product dangerous.