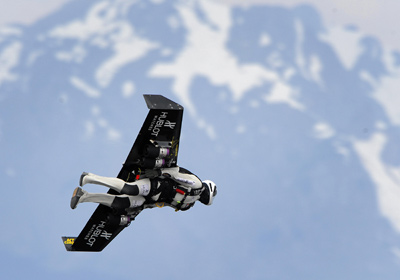 Yves Rossy flies his jet-powered winged suit over the Alps in 2008. If Rossy theoretically passed the speed of sound, he'd be the object responsible for causing sonic booms.
FABRICE COFFRINI/AFP/Getty Images

The sound barrier got its name and its reputation by breaking apart airplanes and throwing them on the ground. It seemed you could fly right up to the speed of sound, but if you sped past it (which tended to happen when diving earthward), you wished you hadn't. The popular perception of hitting the sound barrier bore a similarity to a bird hitting a picture window.

But people are stubborn, and they wanted to know what was on the other side.

"People knew it could be done -- every bullet goes supersonic," says Steve Robinson, who made a living studying turbulence before joining the astronaut corps, where he now makes turbulence for a living. "That's why the first supersonic airplane was shaped like a 50-caliber bullet."

Needless to say, airplanes were soon breaking the sound barrier, and the accompanying sonic boom was breaking windows.

So what is this infamous sonic boom, if not the shattering of the picture-window-in-the-sky?

It's a stampede of traumatized air molecules, actually.

When a plane flies slower than the speed of sound (which is 750 mph/1,207 kph at sea level and 660 mph/1,062 kph at 6 miles/9.7 kilometers above sea level, where the air is colder), the air molecules have time to part and flow smoothly around it. But, like cheese molecules or water molecules, air molecules can only move so fast. They have a built-in speed limit. And since sound is a disturbance passing from molecule to molecule, like falling dominos, the speed of air molecules limits the speed of sound.

So when an airplane goes faster than the speed of air/sound, it stops slicing the air like a knife and begins pushing it like a plow, shoving a fat plug of chaotic molecules before it. As with an explosion, this insult to the molecules generates a shock wave that ripples outward in a sphere. When that shock wave, traveling at the speed of sound, reaches your ear, it sounds like "BOOM."

But despite what many believe, that "boom" isn't a one-time occurrence.

The Myth of the Sonic "Boom"

Calling it a "boom" is misleading. No, you don't bounce off the sound barrier, and no, you don't make a boom when you break through it.

"People think when you go through the sound barrier, it makes this sound once," says Robinson. "That's wrong. You're dragging this boom around with you wherever you go."

That's right: If people stood shoulder to shoulder from California to New York, and the Supersonic Transport Concorde flew over their heads, every single person would hear a sonic boom. It's really more of a "sonic bellow." The auditory fact of the matter is, however, that each person hears just one boom as the shock wave reaches his ears. Well, maybe he hears two booms.

Well, truth be told, you probably hear no booms.

Because earth-bound spoil-sports didn't like the noise any more than they liked having their windows broken, all but the military are now forbidden to boom over land. Robinson and the other astronauts fly their training jets sedately until they're out over the Gulf of Mexico.

Accidents do happen, Shepherd says. Because the speed of sound (and hence the sound barrier) does vary with air temperature, and because pilots never hear their own "sonic bellow," pilots can be ignorant of their crime until they get the bill for the windows.

Breaking the sound barrier isn't cheap, which is why airliners abstain. As you may know from daily experience, it takes far more energy to push your fist through cheese than to slice it with a knife. Seats on the Concorde are pricey because it takes a lot of jet fuel to plow cheese all the way to Paris.

So why bother going supersonic? There's a brief silence from Robinson's end of the phone, as though he's admiring the naiveté of the question.

5 Discoveries Made by the Large Hadron Collider (So Far)
How do they keep track of the particles in the LHC?
Entropy: The Invisible Force That Brings Disorder to the Universe