Riding a Space Elevator to the Top 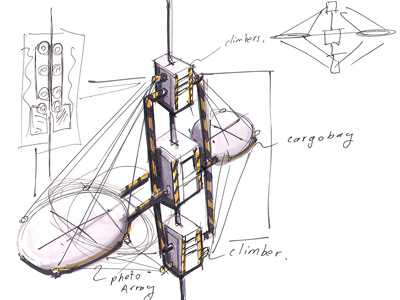 The climbers at each end of the lifter will roll up the ribbon at a rate of about 200 mph.
Photo courtesy LiftPort Group

While the ribbon is still a conceptual component, all of the other pieces of the space elevator can be constructed using known technology, including the robotic lifter, anchor station and power-beaming system. By the time the ribbon is constructed, the other components will be nearly ready for a launch sometime around 2018.

The robotic lifter will use the ribbon to guide its ascent into space. Traction-tread rollers on the lifter would clamp on to the ribbon and pull the ribbon through, enabling the lifter to climb up the elevator.

The space elevator will originate from a mobile platform in the equatorial Pacific, which will anchor the ribbon to Earth.

At the top of the ribbon, there will be a heavy counterweight. Early plans for the space elevator involved capturing an asteroid and using it as a counterweight. However, more recent plans like those of LiftPort and the Institute for Scientific Research (ISR) include the use of a man-made counterweight. In fact, the counterweight might be assembled from equipment used to build the ribbon including the spacecraft that is used to launch it.

The lifter will be powered by a free-electron laser system located on or near the anchor station. The laser will beam 2.4 megawatts of energy to photovoltaic cells, perhaps made of Gallium Arsenide (GaAs) attached to the lifter, which will then convert that energy to electricity to be used by conventional, niobium-magnet DC electric motors, according to the ISR.

Once operational, lifters could be climbing the space elevator nearly every day. The lifters will vary in size from five tons, at first, to 20 tons. The 20-ton lifter will be able to carry as much as 13 tons of payload and have 900 cubic meters of space. Lifters would carry cargo ranging from satellites to solar-powered panels and eventually humans up the ribbon at a speed of about 118 miles per hour (190 km/hour).