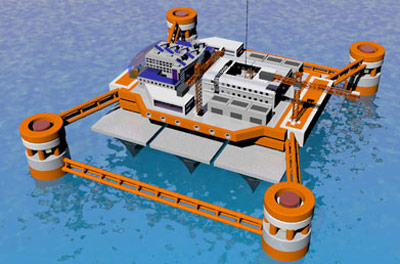 The space elevator ribbon will be anchored to a mobile platform in the equatorial Pacific. As part of a system to help the elevator avoid orbital debris, the mobile platform can be repositioned.
Photo courtesy LiftPort Group

Like the space station or space shuttle, the space elevator will need the ability to avoid orbital objects, like debris and satellites. The anchor platform will employ active avoidance to protect the space elevator from such objects. Currently, the North American Aerospace Defense Command (NORAD) tracks objects larger than 10 cm (3.9 inches). Protecting the space elevator would require an orbital debris tracking system that could detect objects approximately 1 cm (.39 inches) in size. This technology is currently in development for other space projects.

"Our plans are to anchor the ribbon to a mobile platform in the ocean," said Tom Nugent, of LiftPort. "You can actually move your anchor around to pull the ribbon out of the way of satellites."