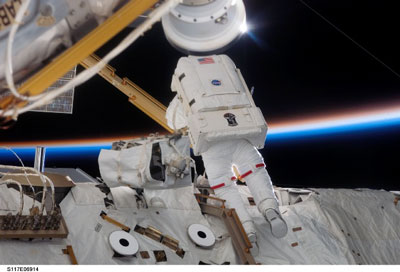 ­For sev­eral days, astronauts on the International Space Station and Russian and American space administrators have been trying to figure out what's causing some of the station's vital computer systems to fail. Although there's no danger to the astronauts' life-support systems, the failed computers control the thruster system, which controls the station's orientation. The problem may be linked to the recent installation of new solar arrays. Fortunately, while the space shuttle Atlantis is docked with the space station, its thrusters can be used to alter the station's orientation. (The station's orientation is periodically changed so that its solar panels get the maximum possible amount of energy from the sun.)

There are three crew members and seven shuttle astronauts on the station right now. NASA has stated that there's only a very small chance that the station would be evacuated. The current computer failure is unprecedented, but fortunately it's not considered especially dangerous for the lives of the crew or the future of the station.

Back on Earth, a bewildering saga is unfolding in Palatine, Illinois that relates to the problems on the ISS. Natalie Meilinger, a science teacher, owns a baby monitor that has been picking up a live video feed from Atlantis on one of its two channels. A NASA spokeswoman said that Meilinger's baby monitor isn't picking up the feed directly from the space shuttle and that she hadn't heard of a similar occurrence in the past.

The video feed is one of four (three video and one audio) produced by NASA for the public. Space-shuttle fans can watch the feeds, including the one available on Meilinger's baby monitor, on NASA's Web site.

For the Meilingers, the video has made for great entertainment in addition to a little bit of intrigue. Speaking to the Associated Press, Natalie Meilinger said, "I've been addicted to it and keep waiting to see what's next" [Source: CNN].

The baby monitor's manufacturer, Summer Infant, doesn't know the cause of the electronic eavesdropping. However, we were intrigued, so we did a little research. Read on to find out what we think may be causing the baby monitor to be picking up the space shuttle's video feed. 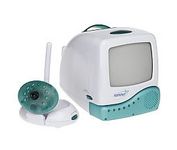 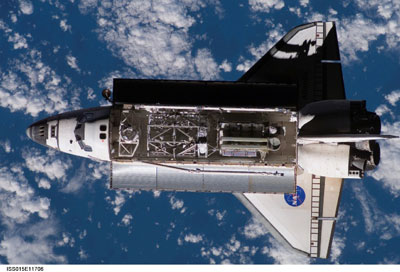