How Space Planes Will Work

Browse the article How Space Planes Will Work

Take a peek at NASA's drawing board and you're bound to see amazing plans for giant, lightweight solar sails that will take us far beyond the edge of our solar system, and space elevators that will allow us to zip in and out of orbit whenever we like. Long before those plans are realized, you will see the latest members of NASA's X-fleet spaceships, which could make space a vacation destination within the first two decades of this century.

Since the beginning of the American space program, the X-planes have been the test models for space technology. Currently there are several experimental X-plane models in development that could make space travel as routine as airplane travel. Each of these latest X-planes are reusable launch vehicles (RLVs), like the space shuttle, which means that they can be launched into orbit repeatedly before being replaced.

These lightweight vehicles are designed to lower launch costs, and could eventually replace the space shuttle, which has been in use since 1981. Commercial space travel remains prohibitive because of the expense: It costs about $10,000 to get one pound (.45 kg) of payload into Earth's orbit. Space planes could lower that price to $1,000 per pound. In this article, you'll find out about some of the space planes being developed by NASA, and how these spacecraft might one day succeed the space shuttle and be used as commercial vehicles for space tourism.

If not for the X-planes, America might never have reached space. It was in the first X-plane, X-1, that Chuck Yeager flew faster than the speed of sound in 1947. More than 100 X-plane variations have followed, each one furthering our understanding of spacecraft design. Today, there are several new X-planes being developed. We will take a look at three of them:

Of the three X-planes mentioned above, the X-37 is the newest and fastest. Unlike other space planes, the X-37 will not be launched under its own power. It is designed to be launched into space on a secondary vehicle. The unmanned, programmable plane will ride onboard the space shuttle as a secondary payload. Once in orbit, the X-37 will be deployed from the shuttle's cargo bay. It will then remain in orbit for 21 days, performing numerous experiments before returning to Earth and landing like an airplane.

In 1998, NASA selected Boeing to design the X-37, and a year later an agreement was reached to develop the new space plane. The X-37 is the only one of the three space planes that is designed to be an orbital plane, and to travel at Mach 25 speed, which means it is capable of traveling at about 17,500 miles per hour (28,163 km/h). The goal of the X-37 project is to test RLV technologies in harsh space environments, and demonstrate about 40 advanced airframe, propulsion and operations technologies. A major focus of the X-37 project is to improve the thermal protection systems that keep spacecraft from burning up during re-entry. NASA has said that the first flight tests for the X-37 will begin in early 2002, and it could go into orbit on the space shuttle later that year.

The X-37 looks a little bit like a miniature model of the space shuttle. It is 27.5 feet (8.38 meters) long, which is shorter than an average school bus and only about half the length of the current space shuttle payload bay. At 6 tons, the X-37 is extremely light for a NASA spacecraft, weighing the equivalent of about three sport utility vehicles. It has a wingspan of only 15 feet (4.57 m) and has its own experiment bay, which measures 7 X 4 feet (2.13 X 1.21 m). The vehicle will be propelled by the AR-2/3 rocket engine, which has been used since the 1950s and can produce more than 7,000 pounds of thrust. The AR-2/3 uses JP-10 jet fuel, a type of kerosene, and hydrogen peroxide as propellants.

Like the X-37, the X-34 space plane is testing new technologies to build future spacecraft that will lower mission costs. However, while the X-37 is still about a year and a half from getting off the ground, testing for the X-34 is already under way.

An artist's concept of the X-34, a test vehicle for future generations of reusable launch vehicles.
Photo courtesy NASA

In June 1999, NASA strapped the unmanned X-34 to the underbelly of an L-1011 carrier aircraft for a "captive carry" flight, in which the X-34 remained attached to the L-1011 for the duration of the flight. During the test flight, scientists were able to analyze several functions of the X-34, including the release of rocket propellant into the engine and electrical connections between the X-34 and the L-1011. Later, the X-34 will be dropped from the L-1011 at an altitude of 40,000 feet, and glide unpowered down to a runway landing.

With the look of a new age Concorde jet, the suborbital X-34 will be able to travel at Mach 8, which is 5,600 mph (9,012 kph). Larger than the X-37, the X-34 is 58 feet (17.6 m) long and has a wingspan of 28 feet (8.53 m). Eventually, the X-34 space plane will be powered by a Fastrac rocket engine, a cheaper engine than previous engines used by NASA. The Fastrac is built mostly from off-the-shelf components, and has fewer parts than other rocket engines. The Fastrac rocket engine operates with a single turbopump, which is composed of only two pumps -- one for kerosene and one for liquid oxygen. The engine's gas generator cycles a small amount of kerosene and oxygen to provide gas to drive the turbine, and then exhausts the spent fuel.

Probably the most ambitious of NASA's space planes, and the most expensive, is the X-33. It also happens to be the space plane that is the farthest along in development. In the next section, we'll talk about a space plane based on the X-33 design that may one day replace the space shuttle. 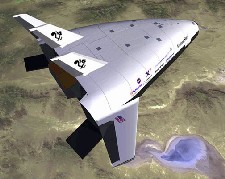 A new era in space travel began on the morning of April 12, 1981, when the first space shuttle, the Columbia, flew into orbit. Since then, the space shuttle has remained NASA's primary launch vehicle for conducting research and deploying satellites and other spacecraft into space. The space shuttle has also allowed astronauts to construct the International Space Station.

However, despite the shuttle's many accomplishments, the fact remains that it is extremely expensive to launch into space. Each pound of payload in the shuttle's bay costs $10,000 to launch. According to NASA, each of the space shuttle's two solid rocket boosters carry about 1 million pounds (453,592 kg) of solid propellant. The large external tanks hold another 500,000 gallons of supercold liquid oxygen and liquid hydrogen. These two liquids are mixed and burned to form the fuel for the shuttle's three main rocket engines. The cost of this huge amount of propellant, and of recovering and replacing the solid rocket boosters for every mission, is extremely expensive. NASA's solution to the problem is the X-33.

The X-33 is a prototype for a unique single-stage-to-orbit vehicle. Its wedge-like shape is unlike any spacecraft that has preceded it. At its base, the X-33 is 77 feet (23.5 m) wide, and the vehicle is 69 feet (21 m) long. The purpose of this design is to allow the spacecraft to hold all of the needed propellant onboard the ship, thus eliminating the need for solid rocket boosters. By eliminating the boosters and the main fuel tank, NASA will trim much of the liftoff weight that makes space shuttle missions so expensive. Launch costs for the X-33, or a derivative of the X-33, are expected to be only a tenth of the cost of launching the space shuttle.

There have been problems with the X-33 project, which began in 1996. At present, it is nearly two years behind schedule, and the costs are far exceeding expectations. NASA and Lockheed Martin have already spent more than $1 billion on the X-33, and it is still only three-quarters finished. In November 1999, tests on the graphite fiber composite fuel tanks failed, which had NASA scientists scrambling to design a new tank out of traditional aluminum material. Despite these setbacks, NASA said that it is going ahead with building the X-33, and now expects to have a functioning vehicle ready for suborbital flight in 2003.

Two uniquely designed engines will propel the spacecraft. The X-33 will be the first space plane to use Linear Aerospike engines. The shape of the engines is a better fit for the wedge-shaped space plane than the conventional bell nozzle rocket engines, according to NASA. In contrast to the nozzle of the Bell rocket engines, the Aerospike nozzle is V-shaped, called a ramp. The hot gases are shot from the chambers along the outside of the ramp's surface. These new engines will propel the X-33 to speeds up to Mach 13 (9,100 mph / 14,645 kph).

The ultimate goal of the X-33 project is to produce a commercial aircraft called the VentureStar, which would be the successor to the space shuttle. The VentureStar will be about twice the size of the X-33 prototype, and will use the same type of engines and the same construction materials. However, it will be able to achieve Mach 25, which is the necessary speed to maintain Earth orbit. Not only would the VentureStar be used to put payloads into space, but it could also be used as a space tourism vehicle. The success or failure of the X-33 will determine whether the VentureStar becomes the vehicle that enables public access to space.