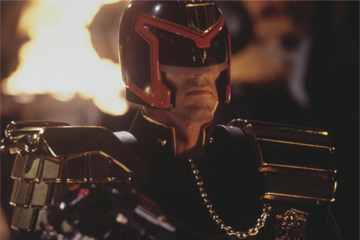 They called Judge Dredd, but he's busy, so who's going to keep the peace in the Wild West of space? See more space exploration pictures.
Richard Blanshard/Getty Images

We tend to imagine space as empty, and most of it is, but travel 50-1,243 miles (80-2,000 kilometers) above the Earth’s surface, in the zone known as low-Earth orbit (LEO), and you'll find a stacked-up superhighway of objects. This is where everything from weather satellites to spacecraft and the International Space Station zip about at upward of 17,500 mph (28,164 kph, or around 23 times the speed of sound) [source: NASA].

On Earth, a bit of kicked-up road gravel might chip your windshield, and a derelict recliner might bring on a fender bender, but in space, a mere soupcon of shards clocking in at Mach 23 will rip through a spacecraft like buckshot through tissue paper. So you can imagine the space community’s reaction in January 2007, when China blasted a weather satellite out of the sky, scattering a record-setting debris field across Earth’s most-traveled space roads [sources: Broad and Sanger; Chang].

If ever a frontier were in need of a sheriff, it is this one. Space is a commons that borders every nation, and the actual or metaphorical fallout from an incident there could spoil days -- or destroy lives -- anywhere on Earth. But regulating space is easier said than done. A handful of United Nations treaties lay out rights, restrictions and principles in broad strokes, sort of like a space Magna Carta, but the nitty-gritty of carrying out and enforcing them is an exercise in ambiguity.

The Outer Space Treaty of 1967 defines space as the "common heritage of mankind" to be explored and used "for the benefit and in the interests of all countries." The question is, how?

Outside of echoing international law, the agreements don’t offer much of an answer. As stated by Article VI (2) of the Outer Space Treaty, "The activities of non-governmental entities in outer space . . . shall require authorization and continuing supervision by the appropriate State Party to the Treaty." This deliberately vague language was inherited from earlier Cold War talks between the U.S. and USSR, neither of which wanted anyone peering too closely at what they were launching into space at the time [sources: McDougall; Spencer].

As the new space race heats up, and as private and profit-making concerns look to the deep sky with dollar signs in their eyes, the need for a tighter regulatory framework grows ever clearer. Can the global community rise to this challenge, while also grappling with space-based ballistic missile testing by China, Iran and North Korea?

Science fiction programs like "Star Trek" enjoy drawing parallels between space and the sea. In one aspect, at least, the link holds true: Like international waters, space is a commons usable by all but owned by none.

When the United Nations drafted the Convention on the Law of the Sea in 1982, it had centuries of seafaring tradition from which to draw; conversely, defining space law meant starting more or less from scratch. Because both are places of natural and man-made perils, where craft of diverse flags and functions may ply their trades, the law of the high seas strongly influenced the law of the low gees.

These space laws also lay out how traveling in space affects ownership (it doesn't); who can own celestial objects, orbits and space routes (no one); who bears responsibility for nongovernmental activity in space (the government in authority over the launching group) and who is liable if a launched object causes harm (the launching nation).

The U.N. has added to its treaties and principles as new technologies and uses for space have come online. Just as Sputnik sparked the first space policy talks, the moon race that followed drove the 1967 Outer Space Treaty's ratification. Its negotiation, along with a series of deadly accidents, led to the 1968 Rescue Agreement.

Related issues of the day spurred the 1972 Liability Convention and the 1976 Registration Convention. Nations adopted the Principles Governing the Use by States of Artificial Earth Satellites for International Direct Television Broadcasting in 1982, at the dawn of satellite television.

Thanks to their broad, abstract language, these treaties and principles mesh well with international law, which, along with the U.N. Charter, still holds sway where gaps occur.

Sounds pretty sensible, right? The problem is, they have yet to be tested. That might soon change. The question is, when it does, will we be ready?

As of March 2012, the U.N. Committee on the Peaceful Uses of Outer Space has negotiated five international legal agreements with respect to space:

Who Watches the Spacemen?

Let's say your kids take your brand-new spaceship for a joyride. While doing doughnuts around the International Space Station, they trade paint with a Soyuz capsule, which then clips a weather satellite, popping off a bolt that falls through the atmosphere to puncture the wing of a Dubuque-bound 747.

Aside from making a strong argument against personal spaceships (or flying cars), this raises some rather important questions on the topic of space authorization and supervision (see sidebar).

According to the Outer Space Treaty, nations must authorize and supervise the space-related goings-on of their private and public groups, much as they do with maritime ships flying their flags. The Liability Convention establishes ways to resolve claims, which boil down to, "you break it, you bought it." In the case of our fictional fender bender, that means the U.S. government will foot all the bills -- at least until Uncle Sam gets around to suing you and sending your kids to juvie.

Authorizing countries face a tough task. They must balance the competing needs of internal security, external defense and economic development, while juggling an alphabet soup of agencies in charge of each. In the U.S., for example, here's who has a stake in the game:

Oh, and add in various states, counties and municipalities, which also have jurisdiction over aspects of aerospace industry regulation [sources: Sterns and Tennen].

So, really, it's a wonder you ever got a license for your space jalopy in the first place (we're sure the registration fees were astronomical).

If authorization is tricky, then supervision is an outright mess. How can the global community confirm that its members are behaving themselves? It's hard enough for U.N. inspectors to gain access to earthbound biolabs and suspected nuclear enrichment sites. Good luck monitoring all activity in space.

The problem dates back to the Outer Space Treaty, which purposely played coy on the topic of supervision standards. The vague approach sufficed in an age when space was the sole domain of national programs, run by countries with vested interests in sustaining global stability [source: Spencer]. Can it hold up in the post-Cold-War, post-9/11 era, in which terrorists and rogue states seek missiles with which to launch weapons of mass destruction (WMDs), and private companies challenge the coping capacity of the blunt, decades-old regulatory structures currently in play?

Our globalized economy depends on the communications, information and electronic transactions that satellites provide. We live in a world where technology is steadily expanding access to space, where nations are embroiled in asymmetrical conflicts and where economic globalization spreads and deepens with each passing day. To cope, space regulation must evolve, too -- as must the sparse community of regulatory bodies that currently supervise the wild black yonder.

In Space, No One Can Hear You Sue

The liability rules laid out in space treaties seem fairly straightforward until you ask who's responsible for space objects that cause damage. They even include an example of what happens if Spaceship A from Country 1 hits Spaceship B from Country 2, which in turn causes damage to Country 3. Bankshot!

Actually, it's pretty simple: When a space object damages an object on Earth or, say, a plane in flight, that space object (and its country) is assumed to be at fault. In space-to-space fender benders, however, it comes down to whoever is at fault. Good luck to whatever space cop, gendarme or Garda has to write that one up.

Shows like "Star Trek" portray Earth as united under one government -- usually a council of fit, jumpsuit-clad, utopians who call the shots for everything from domestic defense to issuing medallions for space taxis. Probably, they have mandatory group sing-alongs over lunch, too.

Or consider the International Telecommunication Union (ITU). Established in 1865 to coordinate telegraph and telephone practices, it later added radio to its repertoire. Then, as the space age dawned, it began overseeing satellites, making sure their radio bursts didn't bring static to the lives of other radio users. Today, the ITU sets satellite licensing and operation standards, and coordinates orbits for 193 member states (and counting).

By comparison, the United Nations Committee on Peaceful Uses of Outer Space (COPUOS) is some pretty weak sauce.Founded in 1959, the committee lacks the teeth of the aviation authority and the wholesale buy-in of the telecom union; should the day come when someone needs to restrain the robber barons of space, the U.N. will need to deputize COPUOS or make way for a new sheriff.

As the ITU and the Chicago Convention show, the key to getting everyone to sit at the same table lies in solving shared problems using enlightened self-interest. Enlightened self-interest is the philosophy behind traffic laws and temporary alliances on "Survivor." Unfortunately, the process tends to resemble the latter more than the former: The global community still struggles to agree on restricted items or enforcement procedures, and agreements are usually carried out at each country's discretion [source: Spencer].

Take, for example, the 1987 Missile Technology Control Regime (MTCR), established to slow or halt the proliferation of missiles capable of delivering weapons of mass destruction (WMDs) [source: MTCR]. Though rigorously applied, it remains informal and voluntary.

The 1996 Wassenaar Arrangement on Export Controls for Conventional Arms and Dual-Use Goods and Technologies seeks to keep rogue states from getting their unstable hands on dangerous conventional weapons, including rockets and ballistic or cruise missiles with a range of 25 kilometers (15.5 miles) or more [sources: Spencer; Wassenaar].

These agreements serve vital functions, and might one day provide the blueprint for a new space agreement, one that lays down binding standards that are policed by a group with enough clout to see them through. Until then, as long as nations can choose how they comply with the standards set down in the handful of binding and nonbinding space agreements, we are likely to witness a wide range of practices, for good or ill.

Riding on the Space Junk

The Inter-Agency Debris Coordination Committee (IADC) is an intergovernmental forum that deals with the growing threat of man-made and natural debris in space. As of 2012, 500,000 pieces of marble-sized (and larger) space junk orbited the Earth, 20,000 of which measured larger than a softball [source: NASA]. IADC guidelines do not constitute a binding agreement, and their implementation and compliance is left to the parties involved.