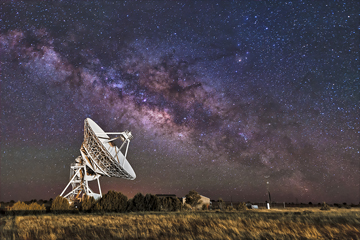 If we're going to judge science on the basis of provocative names, "space roar" might be right up there with quantum entanglement. Scientific funding might be more robust, in fact, if we started to put more mustard into the terms researchers use to christen new projects.

The lesson is: While it sounds like a Katy Perry/Daft Punk mash up, space roar is actually a real area of cosmological and astrophysical study. And essentially, it's probably pretty close to what you imagine it to be. Space, it turns out, has a background noise. Big deal, right? With all those planets creaking their way around suns and whatnot, there's bound to be a little whooshing and blowing around.

Well, remember that space is a vacuum -- meaning that there's nothing for sound waves to travel on. So, honestly, no one would hear you scream in space (or laugh, or burp, or clear your throat, but nobody ever talks about that). So how the heck is space making it's own racket? Well, a little more sneakily than we would suppose. But let's start with how we figured this out, anyway.

In 2006, NASA launched a balloon 120,000 feet (36,576 meters) into the atmosphere, where it was all set to search for heat from early stars. It was using radio waves, which of course aren't visible to the naked eye, but can help us find distant stars giving off faint radio signals. So they put their ears very, very close to the speaker, hoping to hear a very tiny sound that might indicate stars from far off. They turned on the machine-thing and were blasted back by a booming noise six times louder than they were expecting [source: Reddy]. (I'm making up the actual scene, but you get the idea. It was loud; they were surprised.)

Keep in mind that it's not like we're hearing it in the usual sense. If we were launched into space, we wouldn't be saying, "Hey, keep it down out there." Because it is just radio signals, after all. But that doesn't mean it's not still a mystery to scientists. They have no reason to think it's actually the early stars they were searching for, because it's far too loud. And even galaxies, stars and all the other stuff emitting radio waves in the universe just don't add up to the intensity of the sound the scientists were hearing [source: Green].

And that's the kicker. This loud roar is crazy loud, and not only is it making it impossible to detect early stars in the universe, it's also just ... unexplainable. Thus far, at least. However, scientists are hoping that once we figure out what the heck it is, we'll have some idea of what the universe is doing -- or what it did right around the time of the Big Bang.