Is there such a thing as space sickness? 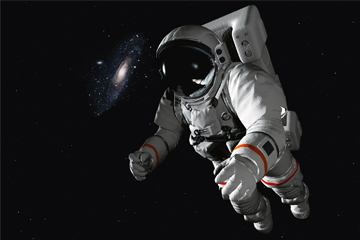 Astronauts prep and endure a lot before being thrust into outer space, but even the most intrepid space crusader may succumb to spack sickness.
1971yes/Thinkstock

Have you ever grown nauseated on a long car ride or felt your stomach lurch while riding a roller coaster? If so, then you've got some idea of what astronauts experience when they head off into space. Anywhere between 60 and 80 percent of astronauts develop space sickness in the first few days after a launch [source: Heer and Paloski]. Symptoms resemble those associated with motion sickness here on Earth, and include headaches, vertigo, nausea and, in extreme cases, extended bouts of vomiting.

For most members of the space program, these symptoms resolve after about three days in space, but can return at any time during the mission, often without warning. Perhaps what's most intriguing is how unpredictable space sickness can be. Even with careful analysis and training prior to launch, there's just no telling who will come down with this condition. Some astronauts with sensitive stomachs may fare just fine, while others with no history of motion sickness may find themselves taken out by nausea and headaches as they adjust to the demands of life outside Earth's atmosphere.

While researchers have yet to pinpoint exactly what causes space sickness, it may be caused by the same inner ear imbalance that contributes to motion sickness here on Earth. Whether you're sitting in a car or in a spaceship, there's going to be a mismatch between what your eyes can see and what you're body feels is happening [source: Boyd].

This mismatch alone is enough to make you sick, but astronauts face a double-whammy in space. The sight/sensation misalignment is made even worse due to the effects of zero-gravity on the body's proprioceptive sensory system. On Earth, this system uses nerve signals to give you an innate sense of the position of your limbs and the orientation of your body. When you're floating above the atmosphere, this system fails, and you may be surprised to feel that your arms and legs are not exactly where you thought they were. Even worse, you may frequently find yourself confused about which way is up [source: NASA].

All this confusion exacerbates the symptoms of space sickness, which can interfere with the astronauts' ability to get the job done — remember, they're up there to work, after all. To study the causes and effects of space sickness, as well as other ways that space travel affects the body, NASA established the National Space Biomedical Research Institute in 1997. Some research at this agency suggests that it may be possible to prevent or reduce space sickness by manipulating the inner ear and vestibular system prior to space flight. For example, teaching astronauts to travel through an obstacle course while wearing goggles could prepare the inner ear to take perception challenges in stride [source: Boyd].