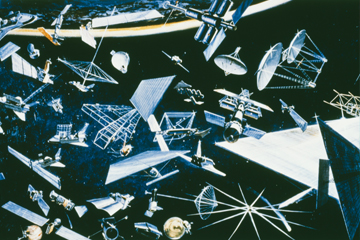 The U.S. Space Surveillance Network currently tracks 17,000 objects, including everything from active spacecraft to inactive satellites as they orbit Earth.
Space Frontiers/Getty Image

Maybe you've heard that space is big. You know, so big that the observable universe is about 13.8 billion light-years away. So big that all the stuff we can see — the planets, the stars, the galaxies — make up just 4 percent of the universe [source: Moskowitz]. So big that it's pretty easy to avoid the neighbors, in other words.

In general, that's absolutely true. There's a reason why we don't have to worry too much about orbital debris smacking into satellites or spacecraft; it rarely presents an issue. But that isn't to say that it never happens, or that it's not something that scientists and engineers need to prepare for. The U.S. Space Surveillance Network currently tracks 17,000 objects, including everything from active spacecraft to inactive satellites and old parts as they orbit the Earth [source: NASA].

Which sounds like a great plan: watch all the objects and just make sure they don't hit each other. But what to do when it's a real possibility that your $690 million telescope is going to get walloped by a 3,100-pound (1,406-kilogram) obsolete Russian spy satellite [sources: NASA, NASA]?

This was the real situation confronted in March 2012 when it appeared that NASA's Fermi Gamma-Ray Space Telescope was on a literal collision course with the Cosmos 1805 satellite. The first step was realizing that the forecast for the collision — about a week before it was set to take place — was much too close for comfort. It predicted a miss of 700 feet (213 meters). And things got even worse the next day, when more forecasts came in that the two satellites would only miss hitting each other by 30 milliseconds [source: NASA]. Project scientists and engineers thought perhaps it was time for a plan, and it was a pretty simple one: Just move Fermi a little bit out of the way.

Easier said than done. Fermi had some thrusters that could do the job, but they were supposed to be used when Fermi's scientific mission was over. The thrusters were designed to shoot the satellite into the atmosphere, where it would burn up. Scientists knew they only had to turn the thrusters on for literally one second to put Fermi on another trajectory and easily miss the Cosmos, but they'd never tried them before.

Luckily, the thrusters worked like a charm. A little boost and Fermi was back to its job within an hour. It missed the Cosmos by 6 miles (9.7 kilometers). A little thrust can go a long, long way in space.

Could the power of a neutron star be harnessed?
Could a Galactic Civilization Survive the End of the Universe?
Neptune: An Ice Giant With Supersonic Winds