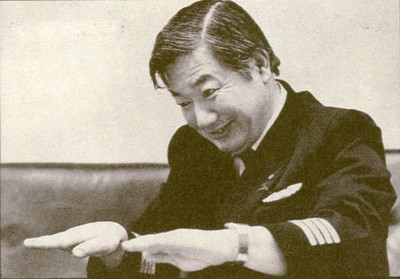 When he first saw them, Japanese Airlines officer Kenju Terauchi, who was piloting a Boeing 747 cargo plane, thought they were lights from a military aircraft. He soon learned otherwise. During the next half hour he and his crew realized that things of a decidedly unearthly character had joined them in the skies over Alaska. It was November 17, 1986, at 5:10 in the afternoon.

The pilot, first officer, and flight engineer saw two lighted structures, "about the same size as the body of a DC-8 jet" in Terauchi's words, moving about 1,000 feet in front of the cargo craft. Terauchi's radio communications to Anchorage flight control were strangely garbled, but enough got through that Anchorage urgently contacted a nearby Air Force radar station to see what it was picking up. At various times during the event the UFOs were tracked by the 747 on-board radar and by the Air Force ground radar.

As the sky darkened, the UFOs paced the 747 and were finally lost in the distant horizon. Then, a pale white light appeared behind the aircraft. Silhouetted against lights on the ground, it looked like an immense Saturn-shaped object-the size, Terauchi estimated, of "two aircraft carriers." He thought it was a "mothership" that had carried the two "smaller" objects, themselves of no inconsequential size. The Anchorage radar was recording the object's presence. For the first time the crew felt fear.

By now the aircraft was running low on fuel, and the captain requested permission to land. The UFO vanished suddenly at 5:39 P.M.