The Plot Thickens at Area 51 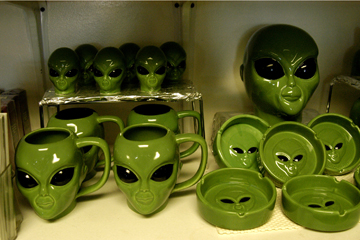 Some of the souvenirs available for sale at the Little A'Le'Inn gift shop in Rachel, Nev.
Barry King/WireImage/Getty Images

Not all conspiracy theories concerning Area 51 involve little green (or gray) men. Some revolve around a shadowy organization (or group of organizations) dedicated to bringing about the New World Order. UFOs and reverse-engineering stories are just tactics these organizations use to distract the public from their real goal -- world domination.

One claim common to Lazar's statements and other UFO enthusiasts' theories is a secret organization known as MJ-12, sometimes called Majestic or Majic 12. This group originally included a dozen extremely powerful individuals like President Harry S. Truman, the heads of organizations like the CIA and powerful businessmen. Documents reported to be from this group have surfaced, mostly as discoveries of UFOlogist William L. Moore, including papers bearing presidential signatures. Skeptics scrutinized these documents and uncovered many signs that they are fakes, including signatures that appeared to be copied from other official documents and pasted onto the MJ-12 papers [sources: UFO Casebook, FBI]. Conspiracy theorists denounce the skeptics as either being fooled or actually employed by the government.

Other theorists say the MJ-12 documents are fakes, but official fakes made by the government to throw people offtrack. Most believers fall into one of several groups, and often each group will accuse the others of actively promoting disinformation to hide the truth.

The most extreme theories about aliens at Area 51 state that not only are aliens here on Earth, they're running the show. Apparently, the U.S. government has agreed to allow aliens to abduct people at will, experiment on these helpless citizens and even grind them up into a paste that is later smeared onto the aliens as a source of nutrition.

Other theorists say that the aliens are here to use humans to create a hybrid creature, since the aliens themselves are no longer able to reproduce on their own. Some offer hope with reports of shootouts between government forces and aliens, resulting in the return of the government to power.

In UFO enthusiast lore, Hangar 18 is the name of the building that houses a captured alien spacecraft and even an extraterrestrial being. The location of Hangar 18 is up for debate among believers. Some have claimed the hangar at Area 51 is Hangar 18.