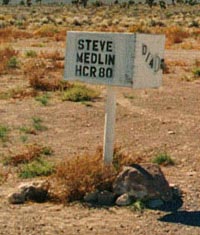 Because the airspace around and above Area 51 is used for test flights and training missions, it is quite possible (and even probable) that you'll see aircraft flying overhead. Sometimes that aircraft might be exotic, perhaps even unidentifiable to the untrained eye. Even familiar aircraft might fool you into thinking you've seen something not of this Earth.

Skeptics point out that many reported UFO sightings coincide conveniently with the scheduled daily arrival of the Janet flights to the base. Many of the formerly classified projects at Area 51 really do look to be otherworldly. UAVs in particular seem strange, as they don't require a cockpit or doors. In addition, many training exercises use bright flares to draw off missile fire or even just to distract onlookers while secret aircraft go through maneuvers.

A popular spot to watch for UFOs is the "Black Mailbox" on Nevada Highway 375 (aka Extraterrestrial Highway). The mailbox belongs to a local rancher and became famous when Robert Lazar said it was the location he'd bring people to in order to watch scheduled test flights of alien spacecraft. Today, the mailbox has been repainted white and the rancher has said many times that he doesn't believe any of the craft flying overhead are alien in origin [source: Powers].

In the next section, we'll look at some of the controversy surrounding Area 51.