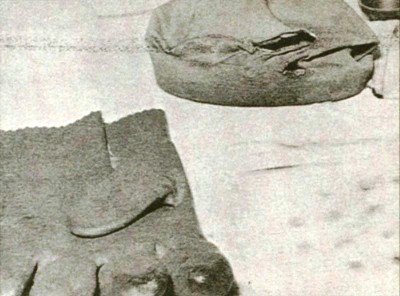 Michalak's cap was burned and his glove melted in a dramatic Manitoba close encounter in 1967.
Fortean Picture Library

Stephen Michalak was searching for minerals along Falcon Lake, 80 miles east of Winnipeg, Manitoba, on May 20, 1967, when he heard the cackling of geese. Looking up into the early-afternoon sky, he saw two glowing oval-shaped objects on a steep, swift descent. One abruptly stopped its downward flight while the other continued, landing on a flat rock outcropping 160 feet away.

Michalak carefully approached the strange craft, which looked like a bowl with a dome on top. Forty feet wide and 15 feet high, it emitted a humming sound and a sulphur stench. On the bottom half, just below the rim of the bowl, was a doorlike opening from which muffled voices emanated. "They sounded like humans," he reported. "I was able to make out two distinct voices, one with a higher pitch than the other."

Thinking he was dealing with a terrestrial craft, he addressed the speakers in several languages, asking if he could help. He got no answer. He poked his head through the opening into the interior, seeing only a "maze of lights." At that moment three panel doors slid across and sealed the opening. As Michalak stepped back, he touched the vehicle's exterior: It was so hot that it burned his gloves.

Suddenly, the object rose, expelling hot air through a gridlike vent and causing Michalak's shirt to erupt into flames. An attack of nausea overtook him.

When doctors examined Michalak in a Winnipeg hospital a few hours later, they noted a dramatic burn pattern all across his chest-exactly like the grid Michalak had described on the UFO's underside. Michalak's health problems continued and brought him to Minnesota's Mayo Clinic the next year. Investigations by official and civilian bodies uncovered no evidence of a UFO hoax. As late as 1975 a member of the Canadian Parliament complained that the government had not released its findings.