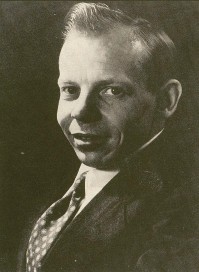 As editor of Amazing Stories and Fate, Ray Palmer was the first major commercial exploiter of flying saucers. He promoted some exotic UFO theories, notably that saucers were based inside a hollow Earth.
Mary Evans Picture Library

In the early 19th century an American eccentric, John Cleves Symmes (1779-1829), sought funding for an expedition to enter the Earth through one of two 4,000-mile wide polar holes. Inside the Earth, he was convinced, a benevolent advanced civilization existed.

Though an object of derision to most people, some took him seriously, and the idea of a hollow Earth was championed in a number of books throughout the rest of the century and right into the next.

Today, hollow-earthers believe flying saucers zip in and out of the polar holes. The people inside are descendants of Atlantis and its Pacific equivalent, Lemuria.

There is even a strong Nazi wing of the movement. According to Canadian neo-Nazi Ernst Zundel, the principal advocate of this theory, Hitler and his elite troops escaped with their saucer technology into the hole at the South Pole.

Can amateur astronomers spot exoplanets?
White Dwarfs Can Shred Planets to Pieces
The Sun Has Siblings, and You Can Help Find Them